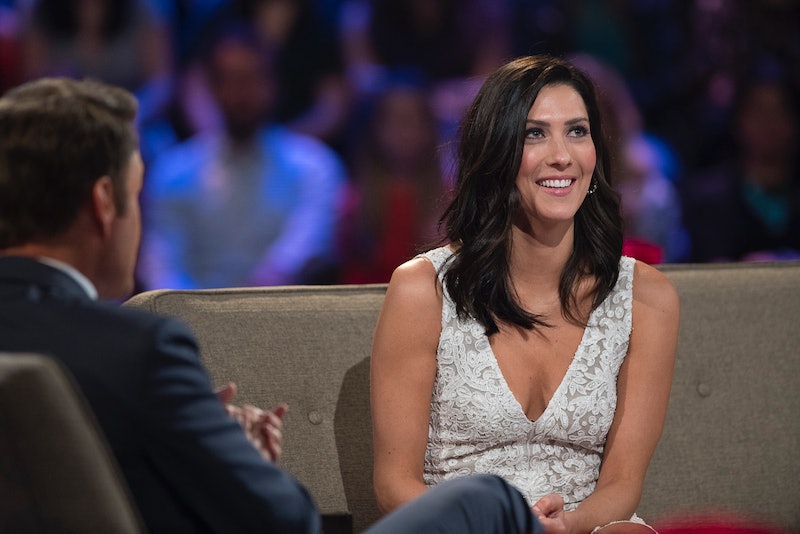 If Arie wasn't going to give Becca her happily ever after fairy tale on The Bachelor, then we're going to make damn sure she gets it on The Bachelorette. After the mess of a finale we all just witnessed, it seems pretty clear that Becca got the short end of the stick, and after watching her dreams come crashing down around her in a spectacularly messed up fashion on Monday night, fans just want her to be happy. There's no time to waste in the search for love, so when does Becca's Bachelorette season start filming?

All signs point to very soon, so soon in fact that it started during Arie's finale — when Becca met five of her new contestants. As for the rest of the real filming, last year, Us Weekly reported that Rachel Lindsay's season of The Bachelorette started filming on March 16, shortly after the finale of the previous season of The Bachelor, so if Becca hasn't been in front of a new set of cameras yet filming packages and intros, it seems like she will be soon. Quick turn around is seemingly routine for the franchise, meaning we could definitely see a Bachelorette premiere date in the near future. According to INSIDER, Arie's season of The Bachelor began filming on Sept. 20 of last year, and the show premiered on January 1. We always knew these people didn't have a ton of time to fall in love with each other, but yeah, that's a pretty shockingly short period of filming.

Notorious spoiler divulger Reality Steve has reported that production crews have been back at Becca's hometown in Minnesota even prior to the airing of the finale of The Bachelor. Reality Steve isn't necessarily always right, so take what he reports with a grain of salt — but he has called a lot of the drama that's unfolded in these past few episodes, and also reported ahead of time that Becca would be the Bachelorette. At least for Rachel's season of The Bachelorette, Bachelor and Bachelorette creator Mike Fleiss gave people solid confirmation that filming had begun by tweeting behind-the-scenes photos of the premiere's production set, so he could very well do the same thing with Becca.

It's kind of amazing that Becca will be thrust back into the spotlight so quickly after Arie's season of The Bachelor, especially after how monstrously screwed over she was after all was said and done. For those who don't know — why are you reading this article, first of all? — Arie initially chose Becca at the end of the season, proposed to her, then summoned some ABC film crews so he could break up with her on camera. He then proposed to Lauren, this season's runner-up, on After The Final Rose. I mean... come on, dude.

If Arie became engaged to someone and later decided the reality TV-cultivated relationship wasn't ultimately what he wanted, then sure. But he's been acting pretty flippant on social media about the whole thing, seemingly casting Becca's heartbreak to the side, and there was absolutely no reason for him to bring cameras along to the breakup, especially since filming had wrapped. Arie manifested a relatively harmless, if boring and repetitive, persona for himself during the run of The Bachelor, but now after all is said and done, it's pretty hard to look at him as the aloof, naive large adult son we may have seen in him before — especially after he got engaged to Lauren on After The Final Rose. Becca deserves much better than what was served up to her on The Bachelor, and hopefully with a new batch of guys served up to her in The Bachelorette, she'll have better fortune when she's in control of her own destiny.