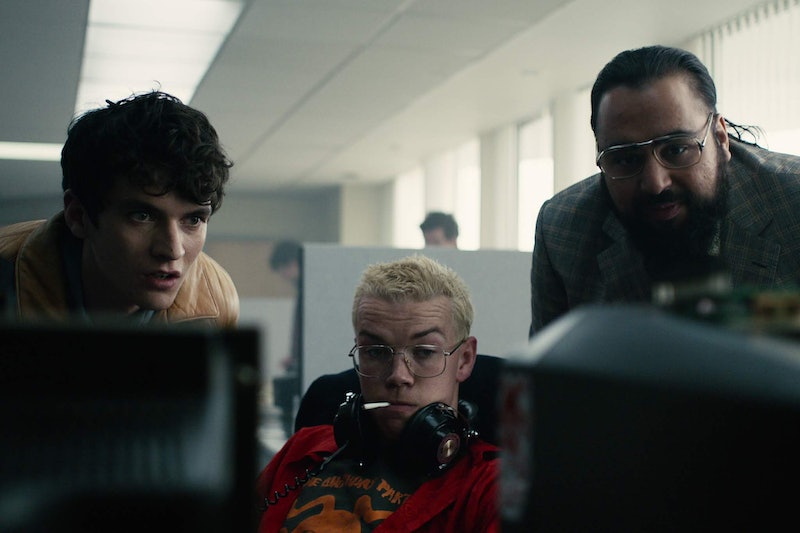 Black Mirror was expected to return with Season 5 in 2019, so when they released a full length film, Bandersnatch, on Netflix on Dec. 28 fans were rightfully surprised. Black Mirror: Bandersnatch is categorized as a "Netflix Original Story," and under the Netflix Film pages, so it's not another full season. So when does Black Mirror Season 5 premiere then? Because the movie is fun and all, but real fans are going to need a little something more.

So far, very little is known about Season 5, beyond the fact that it began filming in March 2018. No directors have been announced, or other titles, or guest writers, or even that much casting. "Season five, we are filming one [episode] at the moment,” Black Mirror creator Charlie Brooker said at the Royal Television Awards, according to Radio Times. “We are about to start filming another one imminently. I’m writing the next one and then it gets a bit more foggy.”

Foggy? How so? That's ominous, and not just because foggy things usually are. Fans don't know how many episodes Season 5 will have, though it seems like there will be more than one, right? In September 2017, Brooker told The Hollywood Reporter that "six is a good number" and might stick with that episode count after Season 3 and 4. So, it's possible that this movie is just an installment of Season 5 or will be fleshed out into a fuller season.

The teaser for Season 5 seemed to build more on the Black Mirror connected universe that has popped up in episodes like "Black Museum" — and the "Bandersnatch" game itself is an Easter Egg to Season 3, so even that doesn't tell us much about future episodes.

But according to Entertainment Weekly, Dunkirk actor Fionn Whitehead will play one of the main characters, along with Will Poulter and Asim Chaudhry. David Slade, who directed season 4 episode “Metalhead,” is also reportedly behind Bandersnatch. The logline for the movie on Netflix reads:

"In 1984, a young programmer begins to question reality as he adapts a sprawling fantasy novel into a video game and soon faces a mind-mangling challenge. Welcome back.”

But as with everything Black Mirror, there's still not a whole lot more information about anything else. In fact, we don't even know if Bandersnatch was one of those episodes that Brooker was talking about in March. Then again, this is Black Mirror, so what is the truth at all? Are they playing with technology and genre by placing this under the "movies" section of Netflix? Don't you kind of feel like the line between television and film is blurry these days? Black Mirror has done a Christmas special before, but who knows what they've got up their sleeves this time.

Fan speculation, which thanks to some sleuthing and a deleted tweet did figure out the Bandersnatch surprise in advance, has only summarized that the rest of Season 5, or all of Season 5, will follow "later in 2019." That's the best guess for now. And lose yourself in the Bandersnatch world.