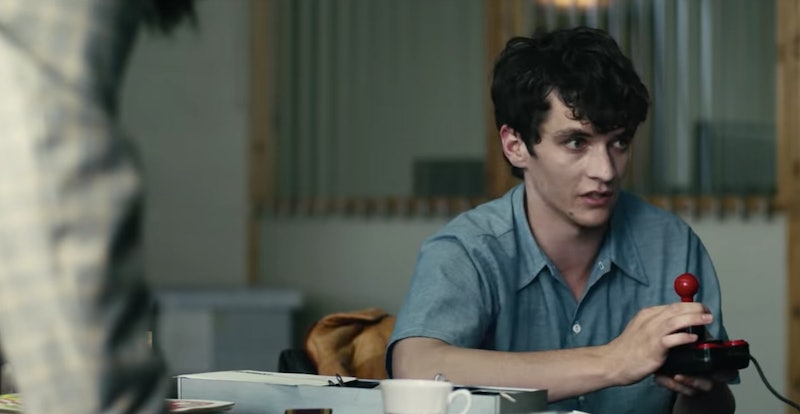 While Black Mirror fans have been awaiting a Season 5 with anticipation, Charlie Brooker and Annabel Jones are first giving viewers a standalone movie. As is only appropriate for the anthology series, the Black Mirror movie Bandersnatch was shrouded in secrecy before its release this week. Now that it's upon us and viewers will be fully immersed in the world of PC gaming from the '80s, fans are doing a deep dive into the original Bandersnatch game from 1984 to see how closely it matches up with Black Mirror's version.

The word "bandersnatch" actually has an interesting history. The term was created and first used by Alice's Adventures in Wonderland writer Lewis Carroll and its etymology only adds to the intrigue of Black Mirror: Bandersnatch. Merriam-Webster defines "bandersnatch" as "a wildly grotesque or bizarre individual" and notes how the word was first used as a name of a "fabulous animal" in Carroll's 1872 book, Through the Looking-Glass and What Alice Found There. In the poem "Jabberwocky," Carroll wrote, "Beware the Jabberwock, my son!/The jaws that bite, the claws that catch!/Beware the Jubjub bird, and shun/The frumious Bandersnatch!"

The term "bandersnatch" was eventually picked up by people and used in pop culture. For instance, there's the psychedelic rock band Frumious Bandersnatch that formed in the 1960s, too. But, as Esquire U.K. reported, it seems that the Black Mirror movie was inspired by the never-released video game Bandersnatch, which also makes sense given the little Easter Egg Netflix included on the title page leading up to the film's release. For a week, the words "be right back" were the only summary fans had to go on. Fans know that Be Right Back is also the name of the Season 2 episode where Hayley Atwell's character brings back an artificial intelligence version of Domhnall Gleeson's character.

The Independent noted that Bandersnatch was a video game developed in 1984 created by the Liverpool-based Imagine Software. But the now-defunct magazine Crash reported that Imagine went broke after just 18 months of being in business. (The fall of the company was featured in the BBC2 documentary series Commercial Breaks.) The highly-anticipated video game never was released, but the remnants of Bandersnatch eventually became Brataccas, according to the blog Retrollection, though it doesn't seem to have much in common with the game featured in Black Mirror.

Through the official Inside Black Mirror book, Reddit user Automaton120 found that a video game under the name of Bandersnatch was already referred to in an episode of Black Mirror. In Season 3's Playtest with Wyatt Russell, the front cover of Edge magazine indicates that there's a review for Bandersnatch inside. In the scene, Sonja uses the magazine to encourage Cooper to take the mysterious job with video game company SaitoGemu.

Since the real-life Bandersnatch was never released, it's hard to know just how directly the Black Mirror film was influenced by it. But no matter what the video game was really about, it's easy to see why the legacy of both the word and the video game are ideal for the Black Mirror world. It's a nonsense word from the 1800s that has become a part of pop culture. And since Black Mirror is all about how new technology can impact humanity, it seems only right that a 19th-century fantastical creature may have morphed into a 20th-century video game that's now going to be a 21st-century immersive TV film experience.