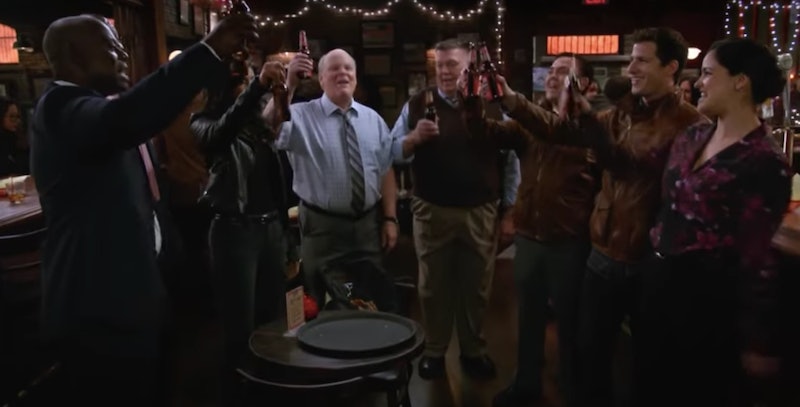 It's been a whirlwind few months for fans of Brooklyn Nine-Nine since the show was canceled by Fox and then picked up by NBC a day later. Needless to say, viewers have no idea what to expect when the series returns after its five-season run on Fox. Making the wait even harder, the Brooklyn Nine-Nine Season 6 trailer leaves fans with one major question that they want answered immediately.

The 15-second teaser reveals little to nothing about the plot or where the series and its characters are headed after Season 5's cliffhanger. The brief trailer shows Detective Jake (Andy Samberg) and the gang hanging out at a local bar as Jake leads a toast. "To the 9-9!" he excitedly says, as the group follows while holding up their drinks. After, Jake is in a tuxedo dancing around (alone) at what looks like a celebration with the rest of the crew.

Fans are expressing their excitement and love for the teaser on Twitter, but collectively, they're left wondering this burning question: When does Season 6 premiere?

Sadly, NBC has yet to announce the release date. Further, the show's Twitter page is having a good time messing with fans and letting them know that.

With this slick response:

Still, it won't stop fans from asking the one thing they must know.

But overall, they're still really excited about the 15 seconds they've seen thus far.

What fans do know so far is that their favorites like Terry Crews, Stephanie Beatriz, Dirk Blocker, Joel McKinnon Miller, and Chelsea Peretti will be back. But there are still a ton of different directions the show can go in moving forward, especially after some of the loose ends presented in the Season 5 finale.

Captain Ray Holt (Andre Braugher), for example, was seen opening an email that revealed if he got the Police Commissioner job, though he didn't announce it to the group. Also in the (then) series finale was Jake and Amy's (Melissa Fumero) wedding, which was really just a series of unfortunate events.

So the celebration fans are seeing in the Season 6 teaser could really be multiple things. Maybe they're toasting to Captain Ray's new job status? Or giving Jake and Amy a proper wedding celebration? Or neither...

Though they're keeping things on the DL, it seems the cast is just as eager for the show's return as fans are. In a recent interview with Collider, Samberg admitted he wasn't totally sold on Season 5's ending and is eager for more storytelling. "For me, it would not have been a particularly satisfying ending," he revealed. "There were so many things that I, personally, as a fan of watching our show, would have been like, 'Oh, we didn’t ever get to see that, and this and that," the actor continued. "You always want to end on your own terms."