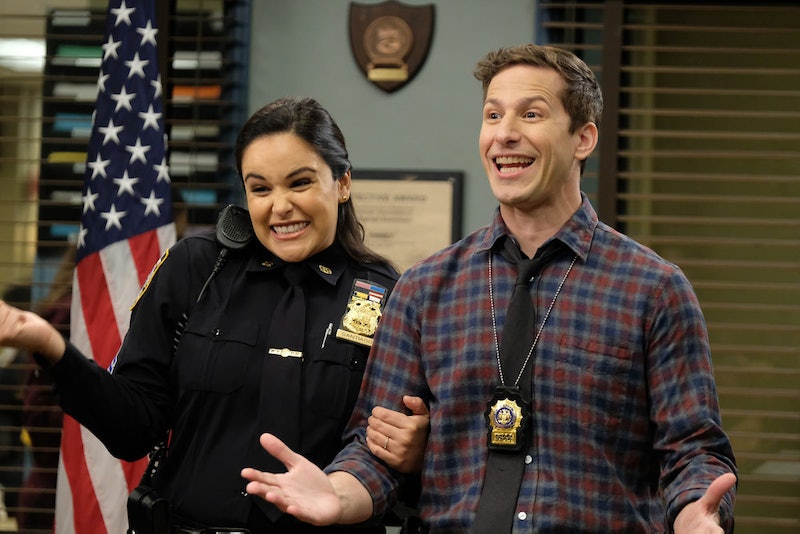 Considering that the show was once canceled by FOX after five seasons, the resurrected Brooklyn Nine-Nine on NBC has been a success: In November 2019, NBC gave the show an early Season 8 renewal ahead of the Season 7 premiere. It's clear that Brooklyn Nine-Nine is thriving under its new network, and if the new season follows the same pattern as the last two and studios resume production soon, fans can hopefully expect the Brooklyn Nine-Nine Season 8 premiere some time around spring 2021.

There's been a lot of uncertainty lately around when shows will go back into production, but the crew behind Brooklyn Nine-Nine has already moved ahead with prepping for their upcoming season. "I'm happy to announce that the #Brooklyn99 season 8 writers room started (remotely) today," creator Dan Goor tweeted on April 20. "The fact that the show has endured for this long is a testament to our amazing actors, crew, and writers, and to our fans, who are the best in the world. Thank you! Stay safe! Nine-Nine!"

The last two seasons of Brooklyn Nine-Nine under NBC debuted in January and February, but it's not yet clear if studio closures will delay filming and push the premiere to late spring or summer. Still, at least we know the scripts are being worked on for whenever studios do open back up.

As for what storylines we can expect, Season 8 will likely focus more on Amy and Jake dealing with the trials and tribulations that come with being new parents. Boyle and Terry will probably cry at one point; Holt will have a moment of endearing insight; and Rosa may just be a surprisingly good aunt, if the "Ransom" episode and her determination to help Amy tells us anything. In the meantime, some fans are already asking for another Lin-Manuel Miranda cameo on the show, while Marc Evan Jackson, who plays Kevin, tweeted at Goor that Season 8 should dedicate an episode to Kevin and Holt renewing their vows.

But perhaps the most intriguing storyline possibility for Season 8 was hinted at by Chelsea Peretti, who plays Gina. In response to Goor's tweet, Peretti tweeted, "hit me w a zoom link if u wanna discuss my arc." (Stephanie Beatriz, who plays Rosa, co-signed her message, tweeting back, "Already on it.") It could all be a joke, but when Peretti left the show back in Season 6, she did tweet that her departure "doesn’t mean I won’t ever be back, winky face emoji, heart emoji."

Gina and Jake are lifelong friends, so it would make sense for her character to return right when Jake is hitting a major life milestone. On top of that, Gina has a young daughter of her own, so it would be pretty fitting for her to reconnect with Jake over his looming parenthood. Though it was never entirely clear why Peretti left Brooklyn Nine-Nine to begin with (she told The Hollywood Reporter her departure "was somewhat mutual" but "amicable"), Gina's possible return is just one thing fans can hold out for as we inch closer to 2021.