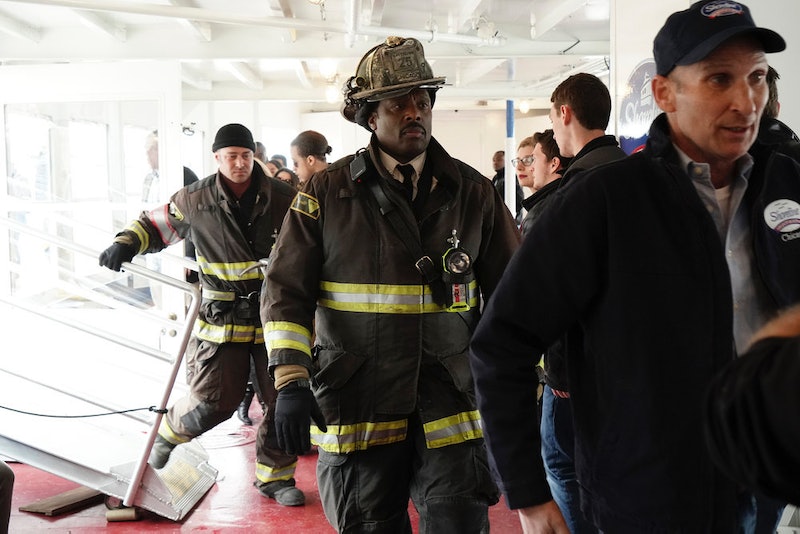 The first half of 2018’s TV season is coming to an end with a slew of finales. It’s time to wrap up storylines, bid goodbye to characters, and leave fans with cliffhangers to keep them tuned in for another season. Some shows are still wondering if they will get picked up for a new season, but according to The Washington Post, NBC drama Chicago Fire will return for Season 7 after its Season 6 finale on May 10. Chicago Fire and its sister shows Chicago Med and Chicago P.D. (which were also picked up for new seasons) typically debut new seasons in the fall, so fans can expect a Chicago Fire Season 7 premiere at that time.

UPDATE: Per Deadline, Chicago Fire will return to NBC on Sept. 26.

EARLIER: The Firehouse 51 crew will wrap up Season 6 on May 10 with a two-hour season finale. The episode is sure to pack in a lot of action with potential cliffhangers. Luckily, any unresolved issues will have a chance to be addressed in future episodes. Battalion Chief Wallace Boden is eyeing a position as the Chicago Fire Department’s commissioner, Stella and Severide’s relationship is being tested by Renee, and Brett and Dawson are facing a harrowing call.

Chicago Fire’s official Twitter page posted an announcement and promised that this story was far from over. The tweet also featured a fiery graphic with Season 7 in bold letters.

Creator Derek Haas hasn’t revealed much about next season’s drama, but he is very pumped about impending Season 6 finale. “It’s more jubilant for me because I know the audience is gonna be squirming at the end,” Haas told TV Guide. He admitted that Boden is a great choice for commissioner but assured fans a promotion wouldn’t necessarily mean Boden was out of commission in the show. Haas said:

There's a whole side of CFD that we haven't seen very much. But [Boden's potential promotion] could bring in new stories and new ideas. The show is called Chicago Fire and I feel like there are all sorts of storylines we could get if we go in that direction. But again, you'll have to wait and see what happens. And I'm not going to tell you that all things will be answered at the end of the finale.

Will this season end with another potentially deadly event? The show has been known for cliffhangers with firefighters’ lives hanging in the balance, but Brett and Dawson should come out alive after this major challenge. Haas promises more of an emotional punch to wrap up this story.

“I didn't want to try to do the same thing we did last year where we have multiple characters in danger of losing their lives in the last two minutes of the show," Haas said in the same interview. “We've done that a couple of times over the first five seasons. Yes, Brett and Dawson are gonna go into a call that's gonna be a little more harrowing than our usual calls but that's not gonna be the big ending. Our big endings are gonna be more of the emotional and WTF variety than the big spectacle.”

Season 7 will hopefully bring back all of the show’s favorite characters, but real-life contracting issues may get in the way. According to Deadline, two of the show’s original actors — Jesse Spencer and Taylor Kinney — have inked new one-year deals with the series. They, along with actors Eamonn Walker, Monica Raymund, and David Eigenberg, initially signed on to the series with six-year contracts, so it is time to either renegotiate a deal or move on. Chicago Fire teased a “change” happening in the season finale, so this could mean someone is leaving the show.

In a show based on people with jobs that constantly put them in harm’s way, anything can happen in every single episode. Hopefully, the team at Firehouse 51 will come out on the other side of this season. Chicago Fire is still going strong and it looks like there are a lot of stories left to tell about this work family.