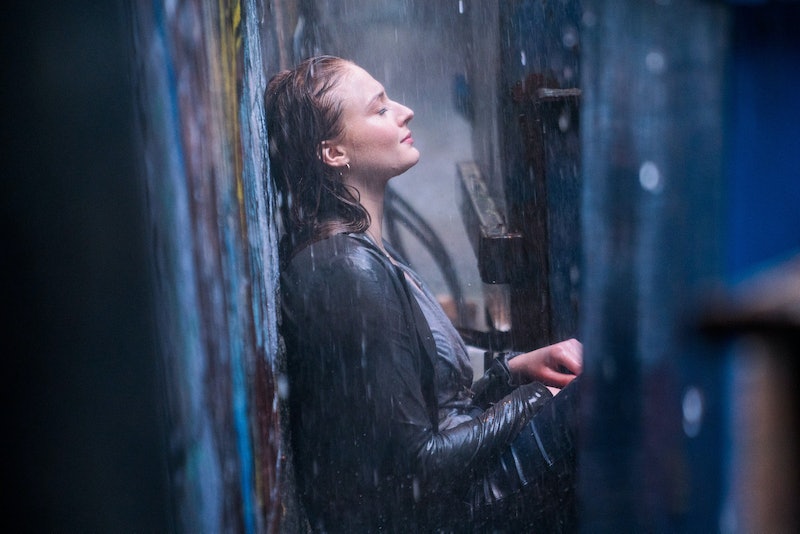 Since X-Men: Days of Future Past plunged the franchise into a trippy, complicated time stream, it's been a little difficult to figure out where — or rather when — we are exactly in the X-Men cinematic universe. Dark Phoenix, which premieres on Jun 7, also comes three years after the last movie in this series, X-Men: Apocalypse, so a timeline refresher may be in order. Dark Phoenix takes place well after that movie, but that's not a complete answer.

The film follows Jean Grey (Sophie Turner) as she develops incredible powers after a mission she and the X-Men embark on in outer space. The power winds up corrupting and confusing her, and turns her into the "Dark Phoenix." In an interview with Empire back in September 2018, screenplay co-writer and director Simon Kinberg revealed the exact year that Dark Phoenix picks the thread back up. "It’s 1992, nine years after Apocalypse," he confirmed. "The X-Men have become the X-Men that many of us know from the comics — they are heroes. They’re still viewed as different by society, but they’ve been more embraced than ever before. And when the movie starts in 1992, they are a known superhero team."

The first time audiences were introduced to the young Jean as played by Turner (the role belonged to Famke Janssen in the first trilogy) was in X-Men: Apocalypse, which was distinctly set in the '80s. At this point, the teen mutants — Jean Grey (Turner), Scott Summers a.k.a. Cyclops (Tye Sheridan), Kurt Wagner a.k.a. Nightcrawler (Kodi Smit-McPhee), Jubiliee (Lana Condor), Ororo Munroe a.k.a. Storm (Alexandra Shipp), and Peter Maximoff a.k.a. Quicksilver (Evan Peters) — weren't suited up in their official X-Men uniforms, but instead were sporting colorful vintage jackets, hoop earrings, and hairdos that definitely belong in that decade.

X-Men: First Class, meanwhile, was set in the '60s. The film is centered on the very first class of X-Men, which is comprised of Raven a.k.a. Mystique (Jennifer Lawrence), Charles Xavier a.k.a. Professor X (James McAvoy), Erik Lehnsherr a.k.a. Magneto (Michael Fassbender), and Hank McCoy a.k.a. Beast (Nicholas Hoult). Meanwhile the follow-up which changed the X-Men films forever, Days of Future Past, was set in the '70s — more specifically 1973. Notably, none of these movies, including Dark Phoenix, make the characters up to look significantly older, even though more time has passed in their world than in ours. And that's another source of confusion for fans.

Some spoilers ahead: Dark Phoenix also features flashbacks to Jean's childhood that are set in 1975, when she was eight years old. She loses her parents in a traumatizing car crash and joins Charles Xavier's School for Gifted Youngsters. The movie keeps going back to that point in time, which is essentially Jean's origin story, and unpacks what actually happened to the telekinetic redhead's family and what secrets Professor X has kept from her and the rest of the X-Men. End spoilers.

What the film doesn't include is Jean's love affair with Wolverine, which was a part of the Dark Phoenix storyline in The Last Stand. Although the clawed mutant hero does meet young Jean in Apocalypse, Kinberg told Rolling Stone that he made the conscious decision not to include Hugh Jackman's character in Dark Phoenix — because of the actors' age difference, and because he wanted the story to belong to Jean.

Dark Phoenix is definitely different from Last Stand, with an approach to the Phoenix narrative that more closely resembles that which is shown in the comics. And if the messiness of the timeline frustrates you, you can just concentrate on Jean's arc. This particular movie can almost stand alone from the rest of the franchise.