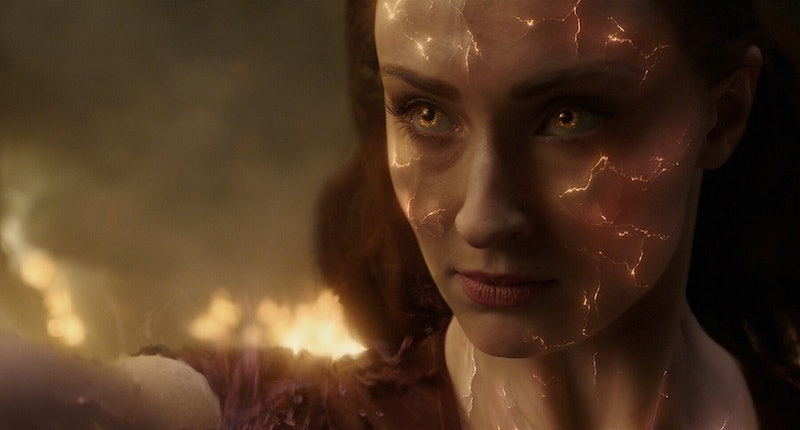 Everyone in Westeros knows better than to mess with Sansa Stark, but even the Lady of Winterfell has nothing on Sophie Turner's newest character. The final trailer for Dark Phoenix teases Turner's most powerful character yet, showing the superhero Jean Grey coming into terrifying new powers — and debating whether to use them for good or for evil.

The new trailer explores how Jean goes from a regular crime-fighting mutant teenager to Dark Phoenix, potential world-ender. In the clip, Jean joins her fellow X-Men on a mission to rescue some astronauts in space, only to be hit by some kind of cosmic force that leaves her with brand new powers. And since the impact normally kills everything in its path, she also gets a new nickname to honor her survival skills: Phoenix. "That power destroyed everything it ever came into contact with, until you," Jessica Chastain's mysterious new character tells Jean in the trailer, seemingly to entice her to use her powers against the X-Men.

"Something's happening to me," Jean says at one point in the clip, as she appears to struggles against the growing, destructive power inside her. "When I lose control, bad things happen — but it feels good." A little while later, she's shown facing off against Magneto (Michael Fassbender) and letting this dark new force guide her. "Are you threatening me? That would be a bad idea," she intones. Sure, Sansa had her fair share of brutal comebacks, but all of Westeros would shiver if they heard her say that.

Though the trailer shows Turner's version of Jean Grey coming into her own power and confidence, the actor has previously admitted that she was incredibly intimidated by the challenges of bringing the Dark Phoenix story to the big screen. "It’s one of the most iconic storylines so revered and [it's so] popular," she told Entertainment Weekly back in December of 2017. "I guess the response to the third movie wasn’t great and there’s definitely a pressure to do it justice. I really believe in [writer-director] Simon [Kinberg] and I believe in all the work we did and I really really hope we did do it justice and I think we did but I hope the audience responds to it well."

To prepare for the role, Turner told EW that she studied multiple personality disorder and schizophrenia in order to showcase Jean's internal struggle, and kept to a strict schedule in order to ensure she was in the best shape to carry the film. "I think I had like two nights of proper partying and on a five-month shoot that’s not very much," she recalled.

"It was funny the first night that I went to bed early we were all at like this big group dinner and I had to work the next day and I was like, 'Guys it’s 9 p.m. and I really have to be in bed,'" Turner continued. "All the producers were so shocked because they know me. You only really get one shot at something like this. I was like 'I cannot mess this up with a hangover.'"

While the pressure of bringing one of the most iconic Marvel comics storylines to life is intense, Turner won't have to shoulder the burden alone, as she told EW that the film makes sure to make the women of the X-Men universe the focus of Dark Phoenix. "It’s really exciting. I think there’s such a revolution in superhero movies,” she told the outlet about the female-focused installment.

"I feel like this movie is a revelation because of it being like a drama but the hero is a female and she’s also the villain," Turner continued. "It really is about her relationships with the females in the film, especially Jessica Chastain’s character. It’s really interesting to have those two characters be kind of the two biggest characters in the movie and both be female and so layered and so complex."

By focusing the trailer on Jean's discovery of her powers — and the internal struggle that comes with them — along with Chastain's villainous influence, the final Dark Phoenix trailer makes it clear that the women of the X-Men universe are not to be underestimated.