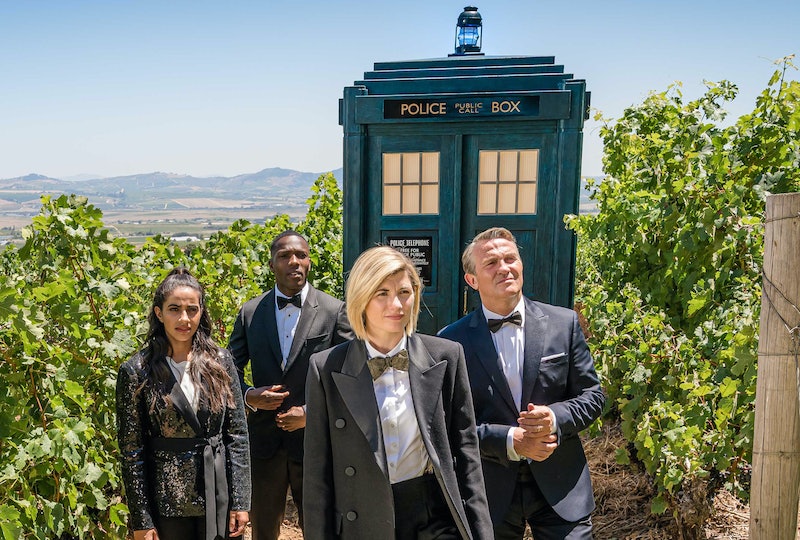 Following the arrival of Jodie Whitaker, last year Doctor Who fans welcomed in their first ever female Time Lord, and after the show's continued success, the science-fiction phenomenon is back for another series. Yes, as the BBC previously announced, the Doctor is finally making her way back onto our screens for a string of new adventures. But when does Doctor Who season 12 start on BBC One? Here's everything you need to know.

Well, as luck would have it, the new series is right around the corner, and as the Radio Times reports, Doctor Who series 12 will debut on New Year's Day, at 6.55 p.m. on BBC One. Following the same scheduling format as last year, the remainder of the series will then continue to air weekly on Sunday evenings — meaning just a few days lie between the first and second episode. Whitaker returns to the helm of the sci-fi epic alongside Tardis trio Bradley Walsh, Mandip Gill, and Tosin Cole, and in addition to the show's main cast, some very exciting names have been lined-up for Doctor Who's 12th run.

According to the Metro, Sir Lenny Henry and Stephen Fry are just two of the major guest appearances to be confirmed by the BBC, and speaking of his upcoming Doctor Who role, Henry revealed that as a longtime fan, his inclusion is "a very special moment." Meanwhile, writer and comedian Fry joked that his guest role will make do as a "very sweet second-place" to being accepted into the British space exploration programme.

As reported by the Radio Times, Fry and Sir Lenny will star in the season's opening episode, and play the characters of a spymaster and a villain, respectively. Show-runner Chris Chibnall previously revealed that he is "buzzing" to be working alongside two of his "absolute favourite actors," and added that being able to bring the national treasure's into one of Doctor Who's "biggest ever stories" is an "absolute thrill."

The two-part season 12 debut, entitled Spyfall, is being billed as an action-packed series opener, and I don't know about you, but the return of Jodie Whitaker's Doctor Who will ensure the new decade kicks off with a bang.

More like this
'The Last Of Us' Has Officially Been Renewed For Season 2
By Darshita Goyal
'The Traitors' Is Officially Being Turned Into A Board Game
By El Hunt
Turns Out George Clooney Is A Huge Fan Of This Classic British Game Show
By El Hunt
Rupert Grint Just Shared A *Major* Update About Ron Weasley’s Future
By El Hunt
Get The Very Best Of Bustle/UK
Sign up for Bustle UK's twice-weekly newsletter, featuring the latest must-watch TV, moving personal stories, and expert advice on the hottest viral buys.