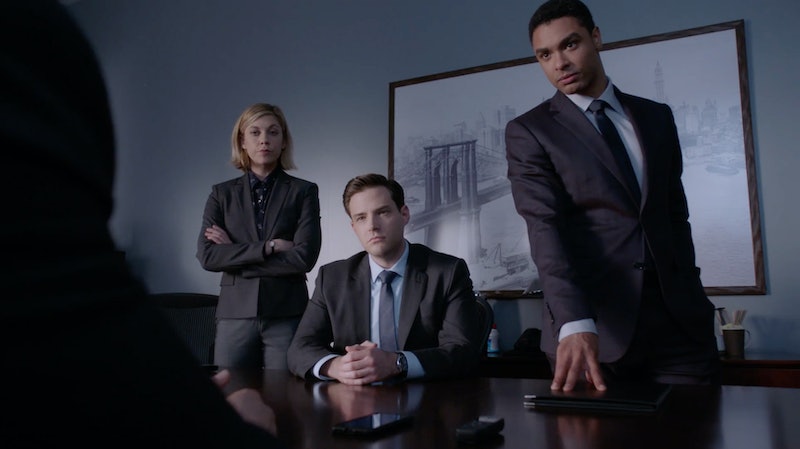 If anyone knows how to keep a show around in Hollywood, it's Shonda Rhimes, the executive producer behind Grey's Anatomy, Scandal, Private Practice, and How to Get Away with Murder (just to name a few). It shouldn't really come as a surprise, then, that the latest product of the Shondaland machine, legal drama For the People, is going to be sticking around for a while longer. For the People premiered on ABC on March 22, and according to its official Twitter, ABC has already greenlit the series for a second season. So when does For the People Season 2 premiere? Well, there's no official word on that yet, but since Season 1 premiered in March, you can possibly expect it some time around then next year. Or, perhaps it will move to the fall with the rest of Rhimes' shows like Grey's Anatomy.

For the People follows the lives of six up-and-coming young lawyers that have just started their careers with impressive gigs at "The Mother Court." While it sounds like it could be the title of a RuPaul maxi-challenge, the Mother Court is actually just the nickname of the Southern District Federal Court for the State of New York. It's here that characters of For the People start their careers as public defenders and assistant US attorneys, juggling high-profile cases and rocky relationships, according to Variety.

Part of what's made For the People such success is the talented young cast at the heart of the show. And for them, it sounds like they couldn't be happier to find out the news that their show will carry on. Most of them took to Twitter to share their happy reactions with the world.

Jasmin Savoy Brown, who plays one of the main characters, Allison Adams, shared a screencap of the news from Deadline, along with an outpouring of gratitude to everyone that made the renewal possible. "Thank you, thank you!" she wrote, "to every fan who tweeted, posted, shared, voted, watched and supported! We are BACK BABY!!!"

Ben Rappaport, who plays Allison's boyfriend Seth, once described his own character to Variety as "little sweetheart guppy from the Midwest" attempting to prove himself in "a pool of sharks." Rappaport also tweeted his enthusiasm for For the People's second season, saying, "We did it folks! #ForThePeople is coming back for Season 2!!! So excited to bring you more!!"

Actor Wesam Keesh also shared a 10-second vid of a particularly excited little kid, along with the tweet, "WHEN YOUR SHOW @ForThePeopleABC GETS RENEWED FOR SEASON 2!!!!"

His cast mate Susannah Flood was equally overjoyed, sending out a heartfelt tweet of her own. "Twitter!" she wrote, "Thank you, truly, to every #ForThePeople fan who tweeted, voted, and gave feedback in favor of our show. I know it made a difference. Sincerely grateful to share the time with y'all and promise to put everything I was born with behind our second season."

While these rising stars are happy to see their careers continue to soar, Shonda Rimes herself is happy to be reaping the rewards of an already long and successful one. On her own Twitter, she celebrated the fact that not one, not two, but FOUR of her series have been given the green light to continue into next year. On May 11, she wrote, "People. This is a good Friday. Why? Because #GreysAnatomy, #HowToGetAwayWithMuder, #Station19, AND #ForThePeople are renewed next season. Congrats to everyone who has worked so hard to make these shows successful!"

In an interview with the LA Times, For the People writer Paul William Davies said that real news events inspire the stories he creates for the series. With this current political climate, then, it seems that he'll have no shortage of material to fill multiple seasons, if For the People should continue even further beyond Season 2. For now, though, the cast is just happy to be back for more.

More like this
Everything To Know About 'Elite' Season 7
By Jake Viswanath
Netflix Bumped Up The 'You' Season 4 Premiere Date — Here's What To Expect
By Bustle Editors
'Bel-Air' Season 2 Finally Has A Release Date & A New Trailer
By Brad Witter, Kadin Burnett and Sam Ramsden
Idris Elba "Breaks Out" Of London In 'Luther' Film First Look
By Sam Ramsden
Get Even More From Bustle — Sign Up For The Newsletter