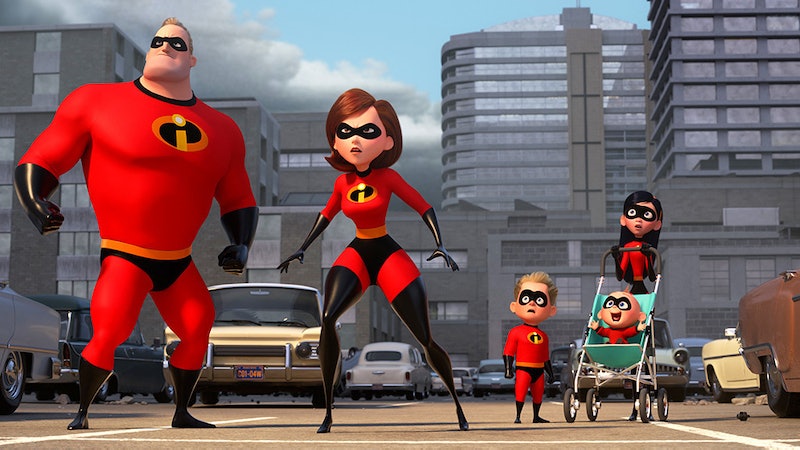 Pixar has come down with franchise fever over the last few years, churning out long overdue sequels like Monsters University, Cars 3, and Finding Dory. The trend is set to continue with this year's Incredibles 2, which is hitting theaters a whopping 14 years after The Incredibles' 2004 debut. But even though the new movie is coming out nearly a decade and a half after its predecessor, that doesn't necessarily mean it takes place in the far off future. So when does Incredibles 2 take place?

The film actually picks up immediately after the first movie — in case you couldn't tell from the trailers which show that Jack-Jack is still very much an infant. At the end of The Incredibles, the Parr family is about to take on a new villain called The Underminer, but the credits roll before the battle begins. The new movie starts off with that battle, leaving basically no daylight between the two films. "It starts right as the first one finishes, so it just carries on," Pixar's John Lasseter told IGN last year at D23 Expo. "It starts with the Underminer and a big old set piece. You know that at the end of the first movie when he comes up and you see the family dressed as superheroes, well that's where (we) start this movie."

So the film takes place directly after The Incredibles, but that doesn't really answer the core question of when Incredibles 2 takes place. As in, is this movie set in the future? The present? The past?

Incredibles 2, like its predecessor, actually takes place in the 1960s. There are certainly stylistic clues throughout the films that this is the case — just look at the cars, clothing, and housing styles and it becomes easy to picture Don Draper heading to work at Sterling Cooper in this world. But in addition to the visual cues that place the films in the decade, The Incredibles actually has bonafide proof that the film takes place in the 1960s. As pointed out by Buzzfeed's Andrew Ziegler, a newspaper read by Mr. Incredible in the first film is dated 1962, placing the story within that year. But that wasn't really the filmmakers' intention.

Bustle's Rachel Simon spoke with writer-director Brad Bird and producers Nicole Grindle and John Walker at Pixar's headquarters in Emeryville, CA in April of this year, and she asked them about The Incredibles' '60s setting. "I probably wouldn’t have put 1962 on the newspaper if I thought it would get out," Bird said. "I didn’t even know that we did that. I just wanted it to feel like the '60s." Grindle added, "It’s more just like an aesthetic choice than anything," while Walker went a step further, saying the idea was to create a future based on the 1960s. "You [Brad] always said it’s like the imagined future from the '60s," Walker said. "That’s when it’s set. What people in the '60s thought was coming."

So really, it seems as if the 1962 date on the newspaper was intended as more of an Easter egg than anything else, and Bird was hoping that no one would notice it and date the movie. So while the movie technically does take place in the '60s thanks to that pesky newspaper, the idea was originally to have a world designed after the future envisioned by the 1960s. Think slick technology from the nuclear and jet ages but with a style still in line with the era that gave us The Beatles. That's not entirely surprising, since Bird, who was born in 1957, was originally inspired to create The Incredibles by the 1960s comic books and spy movies he grew up loving, according to Parade. Such comics, like the Fantastic Four, and films like the James Bond series, may have taken place in the present day of the 1960s, but their tech was decidedly futuristic.

More like this
The 'Hocus Pocus' Sequel Finally Has A Release Date & It Makes Total Sense
By Shannon Barbour and Radhika Menon
Everything To Know About Marvel’s 'Thor: Love And Thunder'
By Grace Wehniainen
What Does Doctor Strange’s Third Eye Mean?
By Arya Roshanian
Elizabeth Olsen's Chris Evans Friendship Update Was Accidentally Hilarious
By Grace Wehniainen
Get Even More From Bustle — Sign Up For The Newsletter