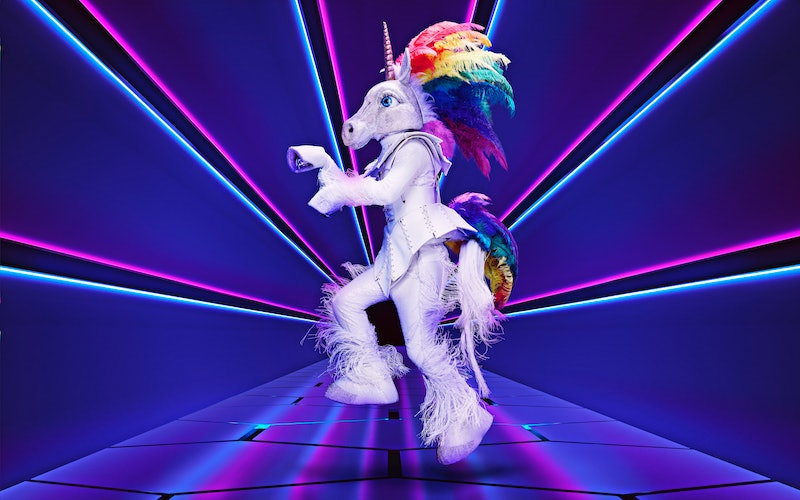 Television's newest singing competition is about to grace our screens, and with a truly bizarre format and stellar lineup of judges, you won't want to miss a second of this slice of ITV entertainment. The series welcomes 12 unidentified celebrities, each of whom will battle it out to impress both the judges and audience with an epic vocal performance. But when is The Masked Singer coming to ITV?

Well, those eager to discover what all the fuss is about don't have too long left to wait, because ITV have confirmed that The Masked Singer will debut in January 2020. Bustle have reached out to a rep at ITV to see if there's any more information on an exact launch date, and I'll let you know if or when we hear anything.

The celebrity singing competition will be hosted by I'm a Celebrity's Joel Dommett, while the all-star judging panel includes chat show legend Jonathan Ross, former Big Brother host Davina McCall, hitmaker Rita Ora, and The Hangover's Ken Jeong. Due to the nature of the show's format, the competing celebrities are yet to be revealed. However, ITV have confirmed the alter egos used by contestants to conceal their identity will include a Unicorn, a Fox, a Monster, a Chameleon, a Daisy, an Octopus, a Duck and a Queen Bee.

In addition to hiding behind elaborate costumes, the contestants pre-performance VTs will be dubbed to ensure nobody figures out who they really are, and, as Digital Spy reports, the celebrities will eventually be unmasked upon their elimination from the competition.

The Masked Singer is based on a South Korean TV format that has now made its way over to various other countries including the U.S. According to the Radio Times, the U.S. version has attracted some major names from the world of showbiz such as Donny Osmond and Gladys Knight, while Deadpool actor Ryan Reynolds has also made an appearance on the Korean edition of the globally popular show.

Masked Singer host Joel Dommett previously described his latest gig as "a dream come true," and is more than confident that "the UK is going to love it." Meanwhile, comedian and actor Ken Jeong — who also appears on the U.S. version of the competition show — has expressed his joy at being featured on the UK judging panel. As the Radio Times reports, Jeong said it was both an "honour" and "privilege" to be given an opportunity to join The Masked Singer UK, and despite hailing from across the pond, the Hangover star has promised that he is "extremely knowledgeable about UK culture."

So, it appears the judges are more than ready to get the show on the road, and you can catch The Masked Singer on ITV in January 2020. Bring it on.

More like this
ITV’s New Take On 'Love Island' Is Only For MILFs & DILFs
By Sam Ramsden
Spencer Matthews’ Impressive Net Worth Expands Far Beyond Chelsea
By Sam Ramsden
Barney Walsh Has Been Linked With This Famous Miss World Winner
By Sophie McEvoy
Molly-Mae & Tommy Fury Revealed Their Baby Girl's "Really Unusual" Name
By Sophie McEvoy and Sam Ramsden
Get The Very Best Of Bustle/UK
Sign up for Bustle UK's twice-weekly newsletter, featuring the latest must-watch TV, moving personal stories, and expert advice on the hottest viral buys.