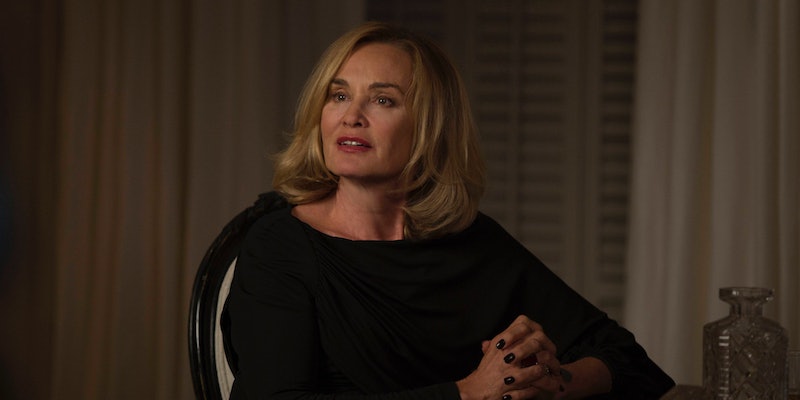 Fans of the hit U.S. horror series American Horror Story have been spoiled rotten with exciting news during the show's eighth run, known as Apocalypse, due to the return of many old faces and cross-over story lines. However, perhaps the most intriguing announcement surrounding the latest series was the news that fan-favourite Jessica Lange would be returning to the franchise. Her grand return sent anticipation for Apocalypse through the roof, but when does Jessica Lange return to American Horror Story?

If you're in the UK, you might be aware that we annoyingly lag a few weeks behind our friends across the pond when it comes to brand new episodes, however don't stress too much, because Lange will be gracing our screens sooner than you might think. During the season's sixth episode, viewers in the U.S. enjoyed the return of Constance Langdon, the character portrayed by the 69 year-old actor in season one of the FX show, known as Murder House. Given that the UK are currently awaiting the fifth instalment of the series, this means that AHS fans (thankfully) only have a couple more weeks left to wait, and the highly-anticipated episode featuring Lange is scheduled to air on Thursday 1 November.

The current chapter of American Horror Story takes place after the end of the world, and will act as a crossover between two of the show's most celebrated seasons, Murder House and Coven. As reported by Digital Spy, both the characters and their storylines will be intertwined in the latest series, which means longtime fans of AHS will be treated to the appearances of many familiar faces. Returning alongside Lange is Emmy Award-winning actor Sarah Paulson, who will reprise multiple previous American Horror Story roles including Coven's Cordelia Goode, Murder House's Billie Dean Howard and a brand new role, known as Venable.

Apocalypse will see character Corderlia Goode, and her accompanying coven of witches, attempt to prevent the antichrist from unleashing unimaginable evil. Interestingly, Paulson directed the episode, titled "Return to Murder House", in which Lange makes her much-anticipated return. The eighth season will also display the return of popular cast members such as Evan Peters, Stevie Nicks, and Emma Roberts - who will be playing the fierce Madison Montgomery, a character who first appeared in the third series of the Ryan Murphy hit.

However it's the reemergence of Lange that really seems to have caught the attention of fans, and they took to social media to express their excitement.

UK fans can start getting excited for what promises to be an epic new episode, as show creator Murphy hinted that the fifth episode of Apocalypse would be something pretty special. During an interview with Entertainment Weekly, Murphy said "It’s a season unlike anything we’ve done because there’s a big hook to it. There’s a huge thing that happens in episode five".

As the current outing of American Horror Story continues, I for one can't wait to witness the varying AHS universes collide, and with the return of the most iconic characters in the show's history - this season looks set to be one of the best yet.