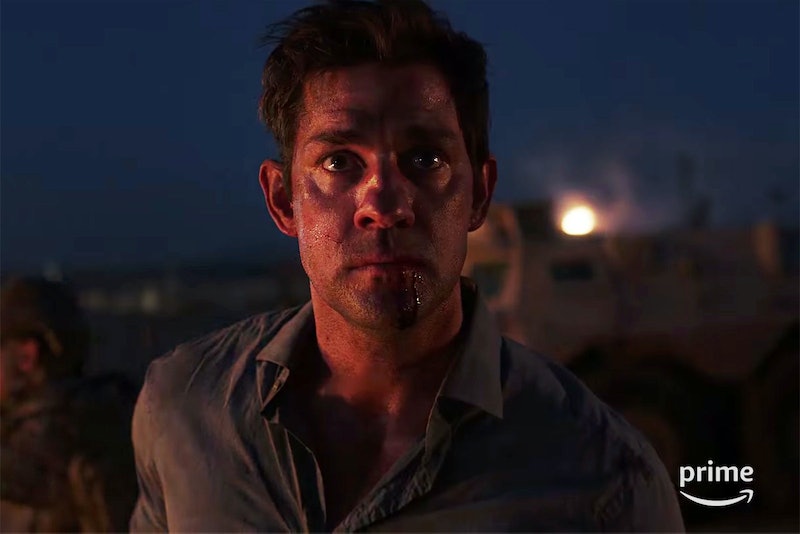 No matter which team you're rooting for, you're going to see a little more action than usual during the Super Bowl. Debuting during the big game is Amazon Prime Video's first-ever ad, showcasing the streaming service's upcoming series Jack Ryan, featuring the actor best known as Jim from The Office. Don't get too excited though, as John Krasinski's Jack Ryan series premiere date isn't slated until August 31.

In the upcoming show, Krasinski plays the titular character, a veteran who left a promising military career after a debilitating accident, became a stockbroker, and got involved with the CIA through a consulting gig. He eventually worked up through the CIA ranks, with a brief stint as vice president (and even president), ultimately continuing his work as a CIA analyst dealing with international crises.

You may not realize it, but you've probably seen Jack Ryan in action before. Alec Baldwin in The Hunt For Red October, Ben Affleck in The Sum Of All Fears, Chris Pine in the recent Jack Ryan: Shadow Recruit, and Harrison Ford with a double-dip in Clear And Present Danger and Patriot Games, all portray the CIA Deputy Director in films based on different Tom Clancy novels about the character.

Amazon's already purchased 10 episodes of the series, showing its full confidence in the power of Ryan to draw in fans of action-packed political thrillers. In an Entertainment Weekly article, Amazon Studios head of marketing Mike Benson confirmed the company's confidence when explaining why this series was the streaming service's first-ever major ad campaign. "Given the colossal scope and scale of the series coupled with the popularity of Tom Clancy’s novels, we knew Tom Clancy’s Jack Ryan would be a natural fit for Prime Video’s first Super Bowl ad," Benson said.

The trailer shows Krasinksi as Ryan in a number of tight spots the world over, set to a cover of Bob Dylan's "All Along The Watchtower" by Ed Sheeran, and featuring voiceovers from presidents of all eras, including Bush, Clinton, and Regan. Ryan as a character was originally a veteran of WWII, but with the choice of Krasinski, the '60s throwback song covered by a '00s darling, and presidents spanning the eras, the trailer wants to create a universality. It's a non-time where these kind of events have occurred and will occur regardless of era, with Ryan the main link that can stop or help the situation.

It's an interesting and canny choice; fans of the novels will likely tune in to the series no matter what, but for newer fans, the modern angle might draw them in. The only problem is that political thrillers tie in to political situations, which are extremely time-sensitive. If the show establishes itself in modern-day, it'd have to retcon Ryan as a veteran of a different war. Conflicts would shift wildly; even between the Iraq wars, America's friends and foes shifted allegiances.

While this hasn't been a problem for the many movies starring Ryan, this is the first TV series featuring the character. Movies can skate by with limited background information, hinting at a family life or military service as the main action unfolds before us. Series, on the other hand, often mine a character's past for emotion and plot, delving deeper into their background since viewers are more likely to care about a character they get to know than one that remains a cipher.

These issues and how Amazon will tackle them will likely remain unanswered until Jack Ryan's premiere, and since it's at the end of August, there's plenty of time between the Super Bowl and then to speculate. For those fans who want a sneak peek before the sneak peek, the ad slated to run during the big game is already available to view online. But for the less tech-savvy (or tech-interested), the first glimpse of Krasinski's take on Jack Ryan will happen during the Super Bowl, possibly creating a new wave of Clancy fans for Amazon.