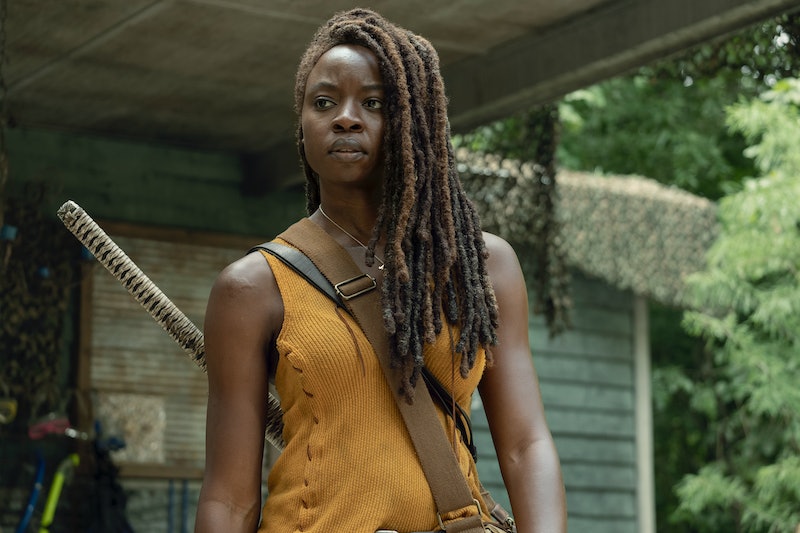 It wasn't much of a surprise that Michonne ventured out to sea with Virgil in The Walking Dead midseason finale, considering that Danai Gurrieri is set to exit the series at some point in Season 10. But it would be a surprise if Michonne just didn't come back on The Walking Dead without any goodbye fanfare. Sure, it happened with Maggie before her, but at least she took her kid! It would be unfair to not let Judith or R.J. know where she ends up. Thankfully, the likelihood of that happening seems miniscule at best.

Back when news of Gurrieri’s departure first broke, The Hollywood Reporter claimed that the Black Panther actor would only appear in "a limited capacity," or a "handful of episodes" throughout the course of Season 10. However, since then, Walking Dead showrunner Angela Kang has shed a little more light on the matter, sharing with Deadline that Michonne “will be a significant part of Season 10” and have a “nice, meaty story” before she leaves the series for good. While it’s true that Michonne has already appeared in a few intriguing episodes earlier this season, they definitely weren't as significant as the impending Whisperer War, which means she’ll most likely be back at some point in the coming weeks.

It’s also worth noting that the Season 10 trailer that debuted at Comic-Con last year included footage of Michonne holding Negan’s iconic weapon Lucille — something that has yet to happen in any of the episodes thus far, making the character’s return all the more certain. So the only question that remains isn’t whether Michonne returns, but when? The majority of the storyline has focused on Alpha and her band of Whisperers, who seem to be making Hilltop their next target. Could Michonne come back just in time to join the battle? Her skills as a fighter would definitely prove beneficial and could even alter the outcome.

Then, of course, there’s the question of how Michonne’s departure will come to be. Both Andrew Lincoln and Lauren Cohan managed to leave the series without seeing the demise of their characters (because let's face it, Rick's not really dead, right?). Will Gurrieri be given a similar treatment, allowing her the possibility to return should the opportunity arise? Or will Michonne face a much more gruesome fate that has befallen so many other beloved Walking Dead figures?

In the comics, Michonne remains alive and well, making it difficult to predict the outcome, though hopefully it bodes well for a happier exit. But just in case, when Michonne does return, let’s just be sure to enjoy every moment of it that we can.