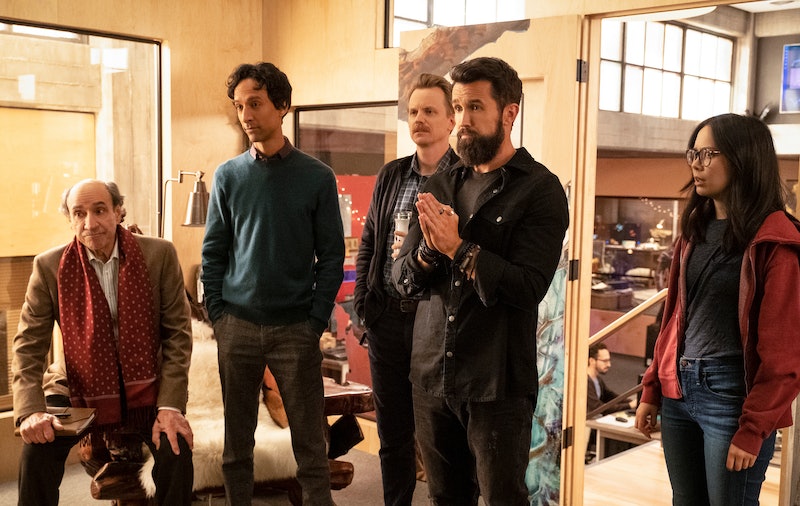 After 14 seasons, It's Always Sunny in Philadelphia creator Rob McElhenney has taken a break from Paddy's Pub for a new venture: Apple TV+'s Mythic Quest: Raven's Banquet, which he created alongside Always Sunny executive producer Megan Ganz and his co-star Charlie Day. It's unclear if the show — which premiered Feb. 7 — will have the same longevity as Always Sunny. But Apple renewed Mythic Quest for Season 2 before it even premiered, so the company clearly has a lot of faith in the series.

It hasn't yet been announced when Mythic Quest might return, but you can likely expect it sometime in 2021. Though the team is wearing a lot of hats right now, McElhenney revealed in a BUILD interview that they're already in the middle of writing Season 2, so it shouldn't be too far off.

We also know where Mythic Quest will pick up when it comes back. Set at a video game development studio expanding its popular massively multiplayer online role-playing game (MMORPG), the show follows creative director Ian Grimm (McElhenney), who butts heads with his lead engineer Poppy Li (Charlotte Nicdao). By the end of Season 1, the tension between Poppy and Ian led to her role in the company changing, which McElhenney told Decider will be the "launching off point" for Season 2. However, the focus won't just be on them.

"You spend an entire season really focusing on Poppy and Ian, and I think what I'm so excited about for the second season is we delve into the other characters and start fleshing them out as people," McElhenney said. "We've got a bunch of home run episodes lined up I'm very excited about."

One thing you won't see in Season 2? An Ian and Poppy romance. "Luckily we don't have to ever worry about a romantic relationship between [Ian and Poppy] because I'm 20 years older than [Nicdao] and it would just be creepy," McElhenney told Decider. When Ganz countered that "people are gonna want them to get together regardless of that factor," McElhenney reaffirmed that they "just don't think about it in those terms at all."

Still, never say never. "Look, this is us in Season 2," McElhenney added. "What happens when we get to Season 14?"