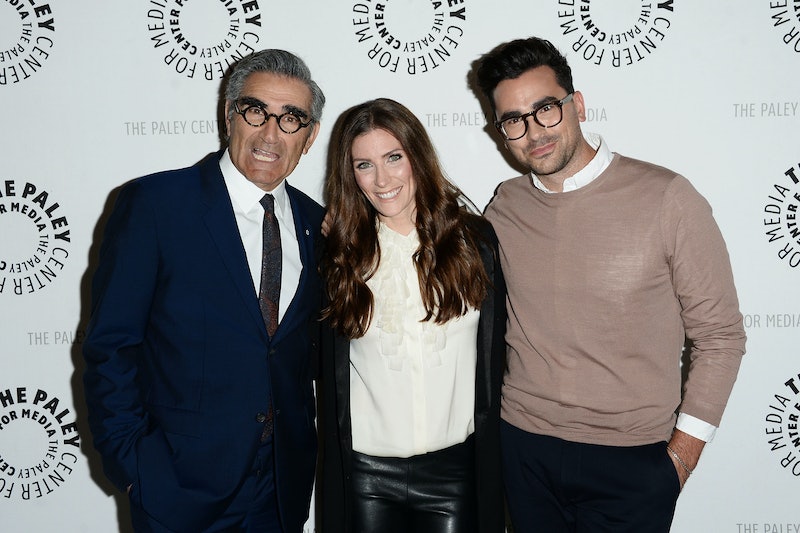 Eugene Levy, who's taken on roles as an actor, writer, producer, and director, has been in Hollywood for over 45 years. He's been America's favorite dad since the American Pie franchise premiered and has starred in dozens of films over the years. But little did he know that at 70 years old his biggest teachers would be his own kids, two up-and-coming talents in entertainment. Levy stars in the Pop comedy Schitt's Creek with his 33-year-old son Daniel (who he co-created the series with) and his 29-year-old daughter Sarah. At The Women's Cancer Research Fund's event in LA Levy tells me how "surreal" the project continues to be for him, mostly because of how blown away he is by his kids.

Currently in Season 3, Schitt's smartly retells the classic Overboard story of a rich family who loses everything and has to suddenly survive in a life of poverty. Living in a small town (of the show's name) they once bought as a joke, Johnny (Levy) and Moira (Catherine O'Hara) cope with the new lifestyle alongside their spoiled kids David (Daniel Levy) and Alexis (Annie Murphy). Sarah Levy plays Twyla Sands, a friendly waitress at the town's local joint. Levy admits working so closely with his kids on a daily basis is a strange experience, but an incredible one, nonetheless.

Levy also admits that he's constantly taken aback by how Daniel and Sarah conduct themselves on set and behind the scenes. Although they're working hard, they're pretty green in the business, especially when stacking up to their famous pops. Sarah made her film debut in 2011's Larry Crowne. Still, they have more grace and knowledge in the business than Levy would've expected.

"[My son and I] started this thing together and I was always thinking that I had to mentor him when we started," he explains. "In a matter of weeks, I realized he is so far ahead of where I thought he was. I thought, ‘Just let him go and listen to him because his ideas are great.’ It was a very, very proud moment." Levy continues to admire his son's talent and work ethic. "He’s just blossomed creatively, as a writer, an actor, a producer, in front of my eyes."

And although he's seen his fair share in show business, he continues keeping an open mind when learning from those much younger and less experienced. Levy shares advice for any parents working with their kids, regardless of profession. "Don’t think you’re better than your kid. Your kids usually have ideas that are better than your[s], that you may not understand," he says.

Thus, the kids Levy raised now teach him a thing or two about work and life. Who knew?

More like this
Lauren Lyle Bustle Booth
By El Hunt
On 'The Handmaid’s Tale,' Christine Ko Fights Back
By Gretchen Smail
Here’s Where You Can Stream 'Schitt's Creek' After The Comedy Leaves Netflix
By Brad Witter
20 Photos Of The 'Hocus Pocus' Cast Then & Now
By Radhika Menon
Get Even More From Bustle — Sign Up For The Newsletter