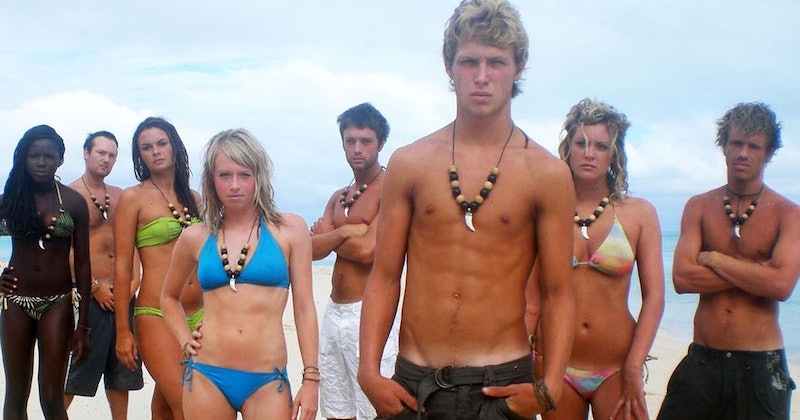 The Channel 4 reality series Shipwrecked saw two teams of sun-kissed contestants battle it out on a tropical island for a cash prize, and after a six year hiatus the popular show is making it's grand return in 2019. Once again, Team Tiger and Team Shark will face the trials and tribulations of life on the island. But when does Shipwrecked start?

According to OK!, no official launch date has been announced, but don't worry, because you'll get to enjoy the islanders shenanigans very soon - as Shipwrecked has been confirmed to begin in early 2019. In regards to an exact date, I've reached out for comment, and will update with any new information once it becomes available.

The show originally aired on Channel 4 for three series between 2000 and 2001, and was later revived in 2006. According to a trailer released last month, the new series will follow the "Battle Of The Islands" format, which sees the two teams compete for a huge prize. However, unlike Shipwrecked's original run, the 2019 edition will instead air on sister channel, E4. The line-up of contestants has so far been kept secret from fans, but it is predicted that the fresh bunch of islanders will be revealed soon.

In the first look trailer, two groups of islanders are shown coming face to face in a heated exchange. After being summoned by a shell horn, other tribe members in war paint join the battle, which majorly hints that as in previous series, the show will focus on a competition-style format. Although the "Battle Of The Islands" theme proved popular with viewers, the original format did not adhere to this, and according to the Mirror, instead followed the similar format of Big Brother, as viewers watched participants do their best survive to in the often harsh conditions of the island.

If you're not familiar with the reality series, Shipwrecked sees two groups of castaways battle it out on separate islands in the South Pacific. The two tribes, known as the Sharks and Tigers, fight to win over the constant flow of new arrivals by convincing them to join the particular tribe. The team with the most islanders at the end of the competition take home the prize money, which according to the Mirror, is a whopping £100,000.

When discussing the show's revival, E4 controller, Karl Warner, said: "Shipwrecked changed the game, and we’re very excited about the new series that confidently shakes up reality TV once again," and continued "Thanks to the amazing creative team behind the camera, a diverse cast of characters and the brilliant talents of Vick Hope, the new series has all the ingredients for a fresh blast of sunshine and surprises to kick off a hugely exciting year ahead on E4."

Joining the show as the 2019 series narrator is Capital FM presenter, and Strictly Come Dancing star, Vick Hope. On joining the revamped reality hit, she said: "I’m chuffed to be voicing the all new series of Shipwrecked," she said in a statement. I was such a fan of the show back in the day on T4, and my friends and I would be so invested in all the tribal twists and turns on Shark and Tiger Island, so it’s a real honour to get to have the first sneak peek at winter’s hottest reality show. There are some amazing characters, epic bombshells and lovely waves of nostalgia ahead."

More like this
'Survivor' Is Finally Coming Back To UK Screens
By El Hunt
What Exactly Is The Bish & Chips Show?
By Frances Stewart
How To Get Tickets To 'Strictly Come Dancing's Live Tour
By Sophie McEvoy
15 Piping Hot Behind-The-Scenes Secrets From 'Great British Bake Off'
By Emily Dixon and Darshita Goyal
Get The Very Best Of Bustle/UK