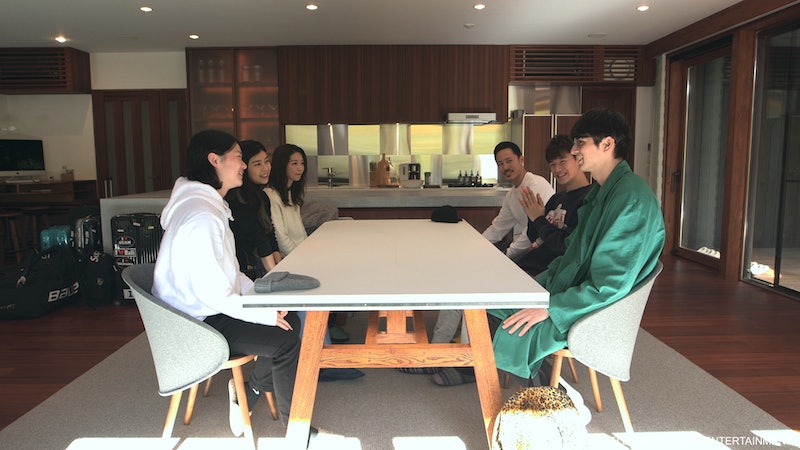 The Season 2 premiere of Terrace House: Opening New Doors will be met with great excitement by some and an overwhelming, "Oh what is that?" from others. Those in the latter crowd are missing out on one of the most unique reality television shows ever, combining the shared-living drama of The Real World or Big Brother with the calm, low-stakes drama of... well, actual reality. With Season 2 releasing on May 22 on Netflix, and no set date for when Season 3 of Terrace House Opening New Doors will premiere, there's never been a better time for newcomers to get into the series, or for die-hard fans to try and get their friends into it.

The best place for any new viewers to start will likely be the beginning of Terrace House: Opening New Doors, which premiered on Netflix earlier this year and is still airing. The series premiered with eight episodes in March and released another eight on May 22, meaning that, should Netflix continue to follow that pattern, another eight episodes should be premiering sometime in late July or early August. Following the Season 2 premiere, there will be only 16 episodes to catch up on to be up to date with the series — and if you're craving more, you can always watch Terrace House: Boys And Girls In The City or Terrace House: Aloha State.

At the beginning of every episode of Terrace House, a panel of Japanese celebrities explain that the show is "about six strangers living together as the panel observes how they interact. All that we have prepared is a beautiful home and automobiles. There is no script at all." However, Terrace House adds up to far more than the sum of its parts. Where American hang-out reality shows often trade in raised voices and heightened conflicts, the miraculous thing about Terrace House is that its version of reality television actually looks like reality.

The series movies at a glacial pace compared to other shows, watching these roommates bond over cooking, grocery shopping, providing each other driving lessons, playing in the snow, and doing activities that don't really have anything to do with any overarching narrative. On the rare occasions in which there is conflict, arguments don't play out with dramatic music stings, talking head cutaways, and loud yelling as is expected on American shows. Instead, conflict is dealt with through heartfelt discussions and quiet honestly. It's unlike any other reality show that focuses on dating and co-habitation, which is part of why Terrace House has proven to be an international hit.

While on paper, the process of watching Terrace House sounds like a boring affair — the actual practice of watching the show can prove to be relaxing, even hypnotic. The show places a lot of value on shot composition and visual presentation, allowing the entire series to look slick and stylish. On top of that, the show's international viewers who don't speak Japanese will need to pay attention to subtitles, meaning that Terrace House isn't a reality show that one can tune in and out of. It forces viewers to watch the show actively instead of just leaving it on in the background. The show's clean visual presentation and audience engagement complimented by the low-stakes conversations and activities of the house guests makes the show a calming watch that can easily eat up an entire evening of viewing.

While the tone and presentation of the show itself is a distinctive factor, perhaps the most appealing part of the show isn't the six houseguests, but the six panelists who comment on the in-house happenings. Every few minutes, the show is interrupted so that a panel consisting of Japanese comedians and television personalities can comments on the proceedings. They critique the actions of the cast, make observations about which houseguests are hitting it off, and joke about the cast's interactions. These interjections keeps the show light-hearted, encourages fans to actively consider what the show's cast is feeling, provides cultural context for the show, and makes Terrace House feels like gossiping with your friends about other people's relationships in the best way.

To say that Terrace House is unlike anything else on television is true, but actually serves to undersell how much of an accomplishment the show is. The show is unlike any other reality show, but in doing so manages to deliver on the promise of other reality television series by presenting something more akin to reality than shows like Vanderpump Rules or The Real World can provide. It shows real people having boring conversations and a real audience having honest reactions. Terrace House celebrates the idea that reality doesn't have to emulate melodramatic soap operas, and that interesting stories can be found anywhere.

More like this
We’ve Got A Text! Another 'Love Island' Series Is On The Way
By Darshita Goyal
Twitter Can’t Get Enough Of The Romance In 'Ekin-Su & Davide: Homecomings'
By Sophie McEvoy
Meghan Markle Just Addressed *Those* Wild 'Real Housewives' Rumours
By Sophie McEvoy
6 Of Mike Tindall’s Unfiltered & Royally Entertaining Jungle Confessions
By El Hunt
Get Even More From Bustle — Sign Up For The Newsletter