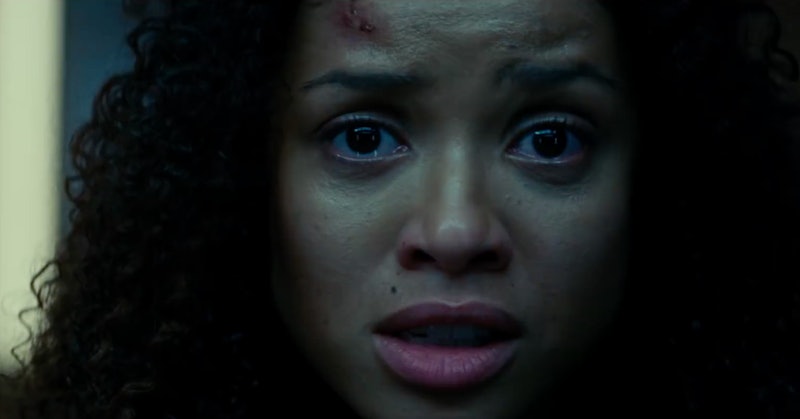 Spoilers ahead. The newest J.J. Abrams movie, the third in the Cloverfield series, came out on Netflix without any warning. It's fitting, considering all of the plot-twists in The Cloverfield Paradox come as major surprises. The movie takes place primarily in a space ship that attempts to power up a gigantic energy source called Shepard. But how does this tie-in to the other Cloverfield movies? And when does Cloverfield Paradox take place? Because most of the newest apocalyptic film is set in outer space, it's kind of hard to tell where exactly the movie fits into the rest of the series.

In Cloverfield, which came out in 2008, a monster threatens to destroy New York City. 10 Cloverfield Lane follows a few people in an underground bunker following a massive attack, though it's not clear who or what caused the chaos, though later they realize that aliens have invaded Earth. So now, in Cloverfield Paradox, you would expect the first two Cloverfield movies to somehow all make sense, but that doesn't really happen.

While it's clear that the new film takes place in the same world as the other Cloverfield movies — a scary dystopian world, that is — it doesn't exactly fit in neatly to a timeline.

In The Cloverfield Paradox, Ava Hamilton (played by Gugu Mbatha-Raw) leaves her husband, Michael (Roger Davies) to work on a mission in space to make Shepard work and save the world from its energy crisis and potential war. While on the ship, the scientists — Schmidt (Daniel Brühl), Monk (John Ortiz), Kiel (David Oyelowo), Mundy (Chris O'Dowd), and Tam (Zhang Ziyi) — continuously check in with the news on earth and learn that the threat of war with Russia is looming over the U.S. during the energy crisis. This may tie into 10 Cloverfield Lane, in which one theory was that the outside's destruction was caused by nuclear war with Russia.

It doesn't exactly become clear whether or not that war actually happens, but one thing you do know throughout The Cloverfield Paradox is that things are not good on Earth, but they aren't necessarily good in space either. After a failed attempt to power up Shepard, the energy source that will save everyone on earth, Hamilton and co. quickly learn that they have traveled to another dimension, an alternate universe type situation. After a lot of failed attempts to fix what went wrong, the end of the movie shows Hamilton and Schmidt returning home in a pod.

In a wild ending, Hamilton's husband Michael yells at the mission control operator who tells him his wife is returning, asking, "Have you lost your mind? You're having her come back to these... things?!" Suddenly, right as the pod with Hamilton and Schmidt go through the clouds above Earth, a ginormous monster that looks like the one in Cloverfield (named Clover) jumps up through the clouds, growling ferociously. You may think then, "ah, so this means that The Cloverfield Paradox was a prequel to Cloverfield," but it's not quite that simple, mostly because if you look at the monster who, when standing, was taller than the clouds, you'll realize that this is a completely different monster from Clover.

If you're looking for a tidy timeline, you will probably be disappointed to know that The Cloverfield Paradox doesn't exactly fit into a chronological timeline of the other two movies, but it does tell you more about the world. While watching the news on the ship, the crew of scientists watched a man who was the other of a book called Cloverfield Paradox warn that the mission to space could seriously mess things up. The foreboding author said that the testing of Shepard could cause monsters to show up on Earth, but not even in the present but also in the past.

Perhaps the space mission, when they entered an alternate universe, triggered something that released monsters like Clover, and the even bigger one who towered over the clouds, onto Earth. The new movie undoubtedly fits in stylistically with the others, so fans of any Cloverfield movie will likely enjoy it, even if they don't get all the explanations they want.