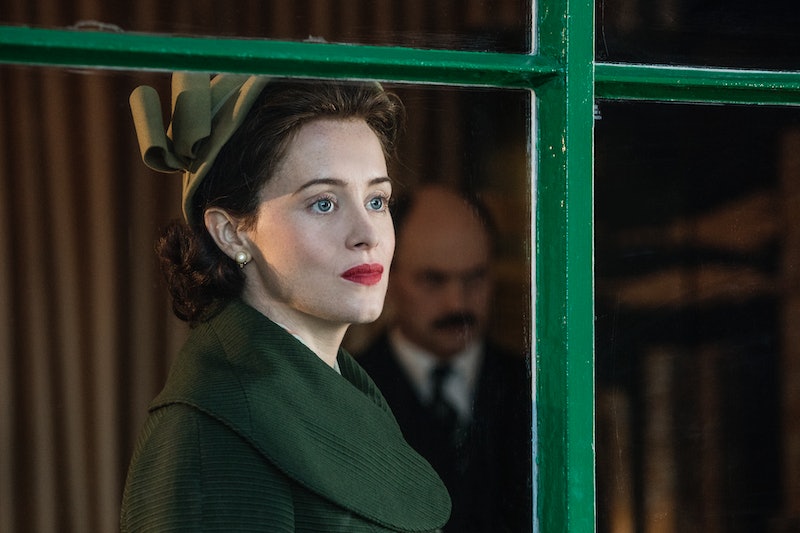 Enthusiasts of the British royal family, Claire Foy's poised and icy stare, and historical binge-worthy dramas are getting an early gift this holiday season. Season 2 of The Crown premieres on Netflix on Dec. 8. Netflix's critically-acclaimed biographic series follows the life of Queen Elizabeth and her loved ones. And rabid fans will probably knock out within two days (and that's a generous estimate). So when will The Crown come back for Season 3?

Sad, but not entirely unexpected, news: it's likely going to be a full calendar year before you can get your next royal TV marathon on again. The first season premiered in early November of 2016, which means that by the time Season 2 premieres it will have been over a year since new episodes were last streaming. While Netflix hasn't announced a premiere date for the next season of the historical drama, you may want to mark your planners and cancel all plans for early December 2018, just to be safe.

When The Crown finally does return for Season 3, though, it'll look very different than prior installments. The idea, as Claire Foy told Vulture after Season 1, has always been to recast all the show's lead actors to keep up with the vast amount of time the plot will encompass. The replacement for Foy, who will play the part of the Queen through the end of Season 2, has already been announced.

According to Entertainment Weekly, Olivia Colman will step into Foy's shoes for Season 3 and stay on through a fourth season as well. Colman won a Golden Globe last year for her role in The Night Manager and also starred alongside David Tennant in the crime drama Broadchurch. The new Prince Philip may have been cast already as well, according to some comments Matt Smith made on Late Night With Seth Meyers. “I don’t want to kind of speculate too much, but yeah he’s brilliant,” he said. “That’s if it’s the person that I think it might be, and he’s incredible."

Apparently, the actors have known all along that recasting as the show continued was a part of the plan. "After two seasons, that’s it. I’m gone. They're getting rid of all of us," Foy told Vulture in the same interview. "I don't how they're planning on doing it, but they're such an incredible bunch of directors and producers that it's gonna be different and exciting. It'll be original. I can’t wait to see where it goes. I’m so honored to have been involved at this stage. I couldn’t be happier really."

Colman and Foy share some of the same physical features and characteristics. And with the show's flawless hair, makeup and wardrobe, there's no telling how seamless this transition could prove to be.

Who exactly will step in to play the other main roles, such as Philip and Princess Margaret, the Queen's sister (currently played by Vanessa Kirby), remains to be shared, but these are not the only cast changes viewers can expect before the show ends for good. Netflix is planning for the show to run six seasons, according to The Hollywood Reporter. "The idea is to do this over six decades, in six seasons presumably, and make the whole show over eight to 10 years," Ted Sarandos, chief content officer at Netflix, said last year at a panel, according to the outlet.

As The Crown only stuck with its original cast for the first two seasons, it's likely that they'll recast an older actress to play a more modern Queen Elizabeth when Colman's tenure is up, presumably after Season 4. Creator Peter Morgan has always said that he planned to recast if the show progressed into later seasons, telling Variety last year that he felt it'd be more authentic to proceed that way.

Audiences will miss Foy — her portrayal of Queen Elizabeth has been both vulnerable and unwavering, bringing humanity to a woman who has often seemed more myth than reality. Colman is up to the task, though. And Season 4 of The Crown, whenever it arrives, will likely be both a continuation of a compelling historic narrative and an interesting experiment in recasting iconic roles.

More like this
Everything To Know About Marvel's 'Echo' Series On Disney+
By Grace Wehniainen
Marvel's 'She-Hulk' Trailer Is Finally Here & The Hulk Lends A Big Helping Hand
By Grace Wehniainen
'This Is Us' Just Gave New Meaning To Jack's Death & His Love Story With Rebecca
By Grace Wehniainen
Will Viewers Revisit Welcome To Eden For Season 2? What To Know
By Kadin Burnett
Get Even More From Bustle — Sign Up For The Newsletter