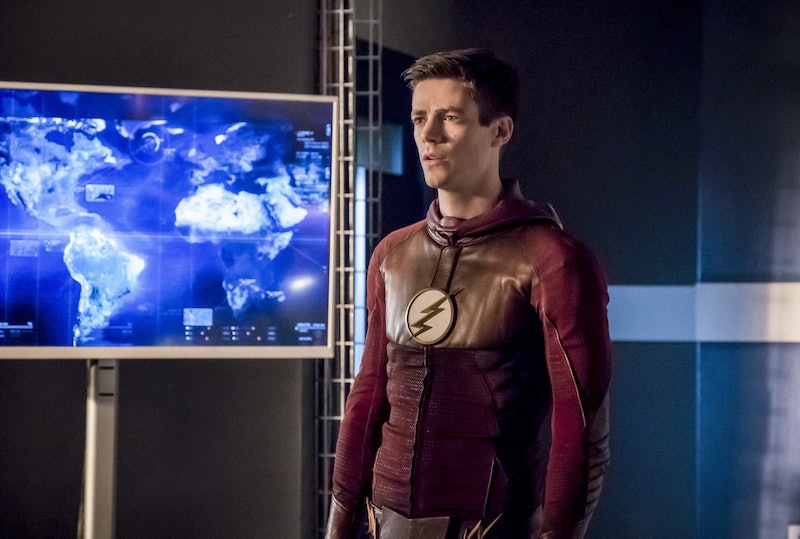 Barry Allen is going all out against Savitar in the May 23 Season 3 finale of The Flash. After experiencing a tragic loss in the penultimate episode, the whole team is reeling, and the events of the next episode will probably set the tone for the next season of the Arrowverse drama. Whether (spoiler alert) Iris' death was a fake-out, can be un-done, or is a fact that the whole team will have to deal with, what happens now is sure to change everything and raise new problems for when The Flash Season 4 premieres.

The Flash was one of several CW series to be renewed comfortably early in its season, so more of Barry and the gang is definitely in the future. (Or the past, depending on where you currently are in time.) The network released its fall schedule prior to its upfronts event earlier in May, and confirmed that The Flash Season 4 will premiere in the fall. No precise release dates have been put out by the network yet, but the show will remain on Tuesday nights, paired with Legends Of Tomorrow.

What will the gang get up to next season? The official description of Season 4 promises business as usual for Barry and the crew at S.T.A.R. Labs. Check it out:

"... But when Barry used his extraordinary abilities to travel back in time and save his mother’s life, he inadvertently created an alternate timeline known as Flashpoint; a phenomenon that gave birth to the villainous speed god known as Savitar, and changed the lives of Caitlin Snow and Wally West forever. With the help of his adoptive father, Joe West, his lifelong best friend and love interest Iris West, and his friends at S.T.A.R. Labs — Cisco Ramon, C.S.I Julian Albert, and an Earth-19 novelist named H.R. Wells — Barry continues to protect the people of Central City from the meta-humans that threaten it."

Wait... that list of helpers seems pretty spoiler-y. Does this mean that Iris will live to see another season? I certainly hope so. The description also makes it seem like H.R. is staying around for a while, which I'm not mad about... though I wouldn't be surprised if The Flash kept coming up with ways to have Tom Cavanagh play new and fun characters.

It's possible that this description is just being generic about the series so as to avoid spoilers, but I have hope for Barry's love. The Flash has had a dark year. Even Oliver Queen would be impressed by the brooding and dark alter-egos. Hopefully Season 4 will be a return to light for The Flash in the fall.