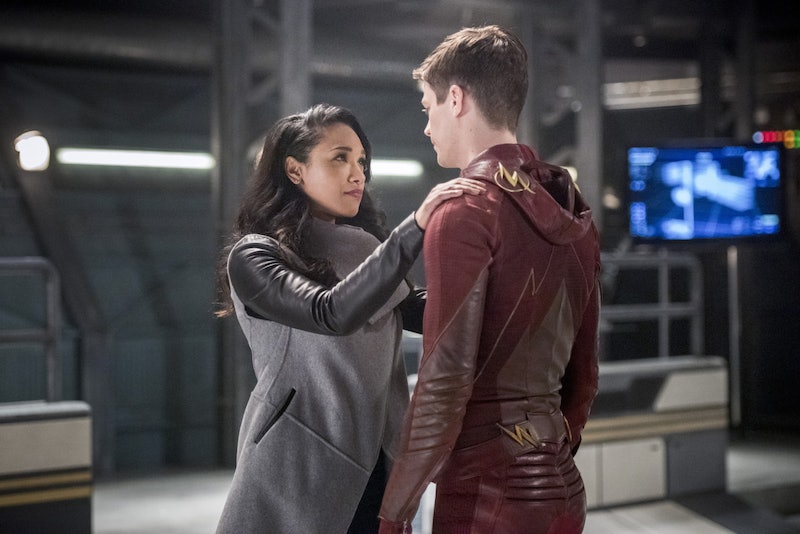 Well, it looks like all the time traveling Barry has done in the name of saving Iris from Savitar was all for nothing on The Flash. Barry and the rest of Team Flash finally catch up to the future Barry had been show of Savitar killing Iris in "Infantino Street," and everyone is eager to find out if anything they had done the past few weeks would change what happens to Iris on The Flash. Unfortunately, it doesn't. Barry watches as the future finally comes to pass, and Savitar drives a metal sword right through Iris' heart. But, is Iris really dead on The Flash?

The episode starts on what was to be Iris' last day on Earth. And, like the (way too) calm woman that she is, she's taking it like a champ. With the Speed Bazooka still in the works, Iris' fate is very much still in the air. So, Barry decides to make one last ditch effort to get the energy for the bazooka and instructs Joe and Wally to hide Iris somewhere, making sure not to find out the location himself so that Savitar won't know it. Alas, one Flash suit and a future Barry is all Savitar needs to trick HR into revealing where Iris is being held. Soon enough, Iris ends up in Savitar's hands, and then dead in Barry's arms.

As Iris dies, fans got a flashback to show a goodbye message Iris had left on Barry's phone: She said that she loved him and recited her wedding vows. Heartbroken yet? Now, while it certainly looks like Iris is dead, there is still hope. Barry isn't against the idea of time traveling if it means saving Iris' life. Maybe if Tracy can figure out how to circumvent the Philosopher's Stone (which blocked the Speed Bazooka), they can go back in time and do it all over again. I still have hope that Barry will #SaveIris.

More like this
The 'It's A Sin' Creator Revealed A Massive Detail That Didn't Make The Final Cut
By El Hunt
'Gentleman Jack’s Cast & Crew Are Keen On Season 3, Too
By Frances Stewart
Grey's Anatomy Fans Refuse To Accept Kaimelia's Shocking Relationship Update
By Brad Witter
Oops! The 'Stranger Things' Monopoly Game Has Spoilers For Season 4
By Alyssa Lapid
Get Even More From Bustle — Sign Up For The Newsletter