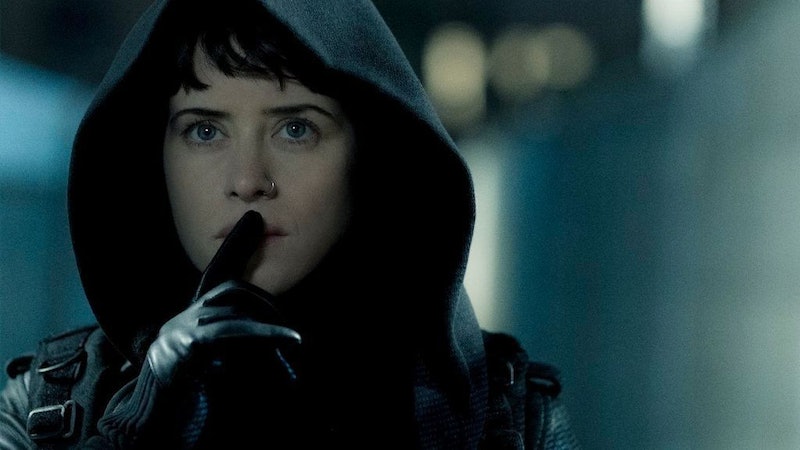 Warning: spoilers for those who haven't seen the existing three Girl films or read the Millennium series books. Vengeance-minded hacker Lisbeth Salander is back with a new face in The Girl in the Spider's Web, the latest film based on Steig Larsson's wildly popular Millennium series of books. Fans of the book series and existing films can be forgiven for some confusion — while the Spider's Web film and book are each the fourth of their kind, the way the movie fits in chronologically among the other films is different than the book it takes inspiration from. So when exactly does The Girl In The Spider's Web take place? The answer hinges on what Hollywood has in mind for the future of the film series.

Larsson wrote three out of the 10 novels he'd planned for the full Millenium series of stories about journalist Mikal Blomkvist and abuse survivor/computer genius Lisbeth Salander, and had most of a fourth written, according to USA Today, when he unexpectedly died of a heart attack in 2004.

Vulture reported that Larsson had signed a book contract that, in accordance with Swedish law, gave over rights to his estate to his estranged father and brother, leaving Larsson's partner of 32 years Eva Gabrielsson with no legal claim. A legal battle ensued, but ultimately the result was new writer David Lagercrantz being brought in to pen the fourth book — known in the United States as The Girl in the Spider's Web.

The book takes place a year after the events of The Girl Who Kicked the Hornet's Nest, and same as the movie based on it, finds Salander enmeshed in a plot involving nuclear arms.

Here's where things get a little tricky. The wildly popular books were adapted in 2009 into three Swedish films, each following the first three books in the series. Then in 2011, director David Fincher made an American film version of the first book, The Girl with the Dragon Tattoo. The Girl in the Spider's Web may follow the fourth book in the series, but it's also a direct sequel to that first American film, skipping over the events of the third and fourth book.

So while the events of the book take place a year after the previous book, The Girl in the Spider's Web leaves the amount of time passed between The Girl with the Dragon Tattoo movie and this latest film more ambiguous. Realistically it's likely more than a year, less than five — characters Salander and Blomkvist, played previously by Rooney Mara and Daniel Craig, are now played by Claire Foy and Sverrir Gudnason, so realistic aging isn't really a problem, but the events at the end of Dragon have Salander heartbroken and furious with Blomkvist, while the information in Spider's Web leading Blomkvist to suspect Salander's involvement make it sound as if enough time's passed for them to be estranged.

The books are far more rapidly paced, with Girl Who Plays with Fire's violent fight ending in Salander's head injury leading directly into Girl Who Kicked the Hornet's Nest's coma and recovery, with only a year passing until the events of Spider's Web. With the movie skipping two whole novels, it'd be a safe assumption that the amount of time passing between them is the ellipse between Dragon Tattoo and Spider's Web — enough that their relationship's cooled completely and needs to be rekindled.

Which is perfectly convenient for a reboot of a franchise helmed by a new director. Speaking to IndieWire, director Alvarez explained that the film jumped years ahead to pick up the story after the third book, so the latest could focus more heavily on Lisbeth with the events of the fourth. "For such a feminine icon like she is, it was kind of unfair that she was there to service the man’s story in the first [book/Swedish movie] and then the second and third one," he said. "I was like, ‘We need to make a movie about her.’ She is the center of it."

The years' distance is a temporal convenience that gives both the characters and a new go at a franchise that failed to launch some room to breathe. The Girl in the Spider's Web opens in theaters Nov. 9, perhaps launching a new run.