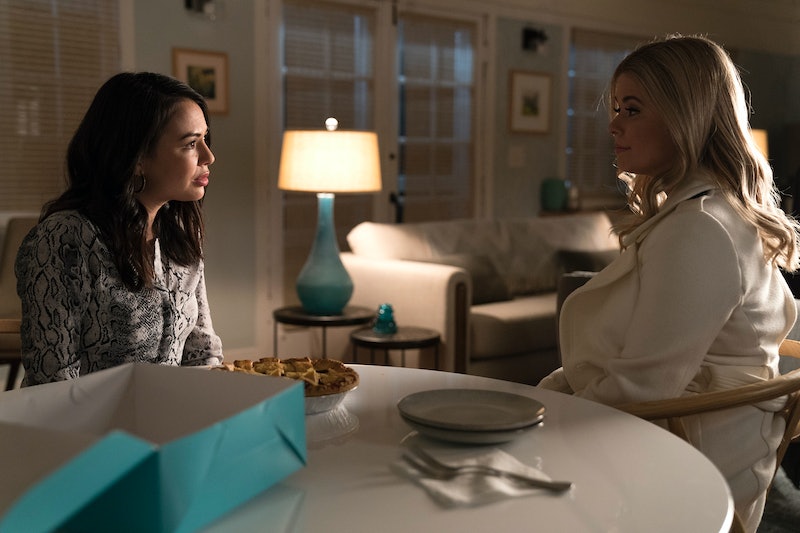 You can take the girls out of Rosewood, but apparently you can't get them away from murder. The new trailer for the Pretty Little Liars spin-off The Perfectionists might not include A, but it does feature a mysterious new murder that once again has a connection to Alison DiLaurentis and Mona Vanderwaal, two people who unfortunately have a lot of experience with this sort of thing. Fortunately for us, however, it looks like the new spinoff will be filling the PLL-sized hole in your heart sooner than you may have originally thought since The Perfectionists premiere date is right around the corner.

"Is it OK to murder a murderer?" It's the first question Pretty Little Liars: The Perfectionists trailer asks. And boy, is it a real doozy. It's also the kind of question that will get hardcore PLL fans instantly hooked on a show. And lucky for those already intrigued by this initial question, the new promo announced that The Perfectionists is coming to Freeform on March 20.

This creepy new trailer is already teasing too many secrets for any one person to keep. And it's clear that PLL's Alison (Sasha Pieterse) and Mona's (Janel Parrish) move to Beacon Heights was probably more deadly than they originally thought. "Murder can be justified," a man says, as Alison is shown peering suspiciously out a window. While another person fiddles with some torn wallpaper as they nonchalantly reveal, "I have thought about him dying in a lot of different ways."

Who is this him? Well, that's part of the mystery of this series, which is based on PLL author Sara Shepard’s other book series, The Perfectionists. The books focus on three perfectionists — Sofia Carson's Ava, Sydney Park's Caitlin, and Eli Brown's Dylan — all of whom will do anything to be the best, and that might include murder. According to a Freeform press release obtained by Bustle, "The stress of needing to be perfect leads to the town’s first murder." (Which really wouldn't be the first time for the newest girls in town, Alison and Mona.)

Last year, PLL and now The Perfectionists showrunner I. Marlene King talked to TVLine about the role two of Pretty Little Liars' darker characters would play in the new series. “Tonally, it’s very similar,” King said of the comparisons between The Perfectionists and PLL. “There is a big mystery, and there is a murder, and there are some characters who are a fractured group at the beginning of our story, and through a murder they become friends."

But, she said, it's "a whole new mystery, a whole new murder" and Alison and Mona's role in all of this will "all make sense when you see the pilot.” Are Mona and Alison teaming up to solve this mystery or do they have something to do with it? It's hard to believe some of their bad deeds didn't follow them to Beacon Heights.

It's also worth asking whether Mona is up to her old tricks in her new locale. She was, after all, a key member of the A-Team for a while, and if she's good at anything, it's keeping secrets. These are the kinds of questions that will help this twist-filled mystery that is trying to give PLL a run for its money. Luckily, it's one fans can start solving in just a little over a month.