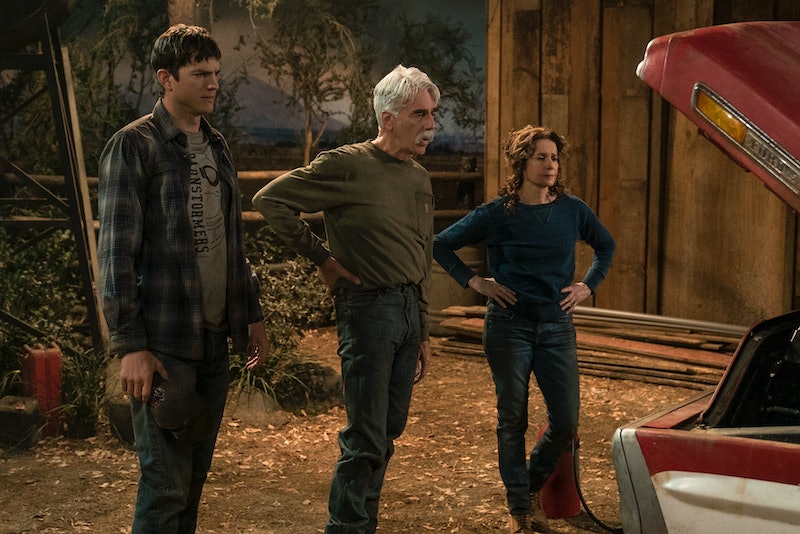 After a major character departure closed out Part 1 of Season 3, The Ranch returns for Part 2 on Dec. 7. Now that Rooster has skipped town, the Iron River Ranch will be in flux, but fans can rest assured that, even as they navigate an uncertain future, the show will be coming back for more episodes. As reported by The Wrap, Netflix has renewed The Ranch for Season 4. A premiere date has yet to be announced, but the fact that the Bennetts make it through the end of Season 3 bodes well for the family and their farm.

Plus, there are few guesses to be made about when we'll see the red-state sitcom back on-screen. The fact that Seasons 2 and 3 of The Ranch debuted in the middle of June 2017 and 2018, respectively, suggests that viewers should look forward to Season 4 in the summer of 2019 — a welcome return after a tumultuous year.

From the beginning, The Ranch has been somewhat of an unusual project for Netflix. A rural sitcom rife with conservative viewpoints, it utilizes dramatic silence as often as it uses canned laughter, and with an unconventional release strategy to boot: each season arrives in two separate, 10-episode "parts," rather than Netflix's usual all-in-one dump. To put it simply, it was not something Netflix had done before. However, it's clear that the show's fans — 648,000 of whom have liked the show's Facebook page — have done a great deal of heavy lifting when it comes to supporting the show, especially considering its fourth season renewal comes on the heels of some significant controversy.

As reported by Deadline, Netflix fired star Danny Masterson in December 2017 following allegations that he had raped multiple women in the early 2000s. (Masterson has vehemently denied the accusations). In turn, Masterson's character, Rooster, was written out of the show. After his girlfriend's ex tracked him down and held a gun to his head, encouraging him to "disappear" or he'll "make" him disappear, Rooster chose the former option. The violent ex also threatened that if he ever tells anyone, he'll "start with [his] family," implying he would kill the other Bennetts.

Following Masterson's departure from the series, Part 2 of Season 3 introduces new character Luke Matthews, played by Dax Shepard, a soldier who has history with the Iron River Ranch and quickly finds his place within the Bennett family dynamic. However, while Luke's presence may help balance out the show for the time being, Shepard's role in The Ranch likely won't be a permanent one. Deadline reported in March that he will not be replacing the character of Rooster for the remainder of the series, and considering Shepard has signed on as the male lead in Fox comedy pilot Bless This Mess, he probably won't be sticking around too long. This means that Season 4 could introduce even more characters to make up for the now-upended Bennett family, or shake up Iron River Ranch with some even more major changes.