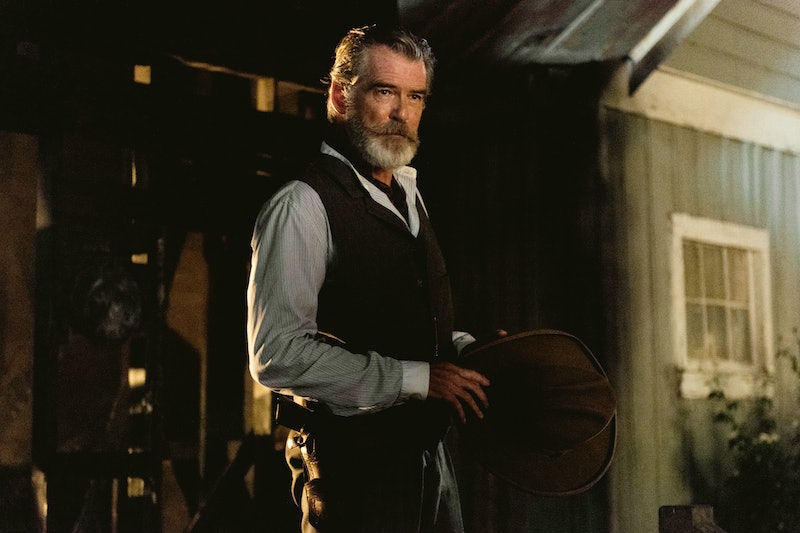 Following in the footsteps of other Western series like Lonesome Dove and Hatfields & McCoys, AMC's The Son has beautiful, sweeping shots of the Texas landscape, period-appropriate facial hair, and gun battles on horseback. Perhaps knowing that they have something unique in producing an original Western, AMC has already renewed The Son for Season 2, and, according to Variety, the second season will be 10 episodes and premiere sometime in 2018. As for when The Son Season 2 will premiere, the network hasn't announced a specific date yet.

But given the scope and scale of this production, even if the show's writers get back to work right away, it will probably be at least a year before Season 2 premieres. But I suppose fans can remain cautiously optimistic for a speedier return. After all, the show's renewal came almost a month in advance of the Season 1 finale, proving that the cable network is confident in The Son.

Certainly, that confidence is echoed by author of The Son novel, Philipp Meyer, who told Cowboys & Indians before Season 1 even debuted that he sees "a five season arc" for the show. "Within five seasons we could basically do the book and some stuff I left out of the book," Meyer explained. "Like, there’s stuff that I touch on in the book for two pages that I had two chapters written about. But I was just like, man, am I really beating the reader with this much?" In a TV show, naturally, that's less of a concern, since more detail can be rendered visually. That means the series can add on new supporting characters or even new self-contained adventures.

AMC has another promise for fans of The Son: Pierce Brosnan will return as Eli in Season 2. Brosnan released a statement, saying, "I am over the moon happy to be back in the saddle as Colonel Eli McCullough for Season 2 of The Son and to stand shoulder-to-shoulder alongside our incredible cast of actors, writers, directors and our amazing crew in the heart of Austin, Texas." That means the show's ornery patriarch will remain a part of the story, even as the show's timeline continues to move into the future. The Son novel spans several generations, so there will be plenty of material to choose from.

Back when the series first premiered, AMC's description of young Jeannie, Eli's granddaughter, explained, "Over many seasons, the show will dramatize her evolution from an 11-year old tomboy, mentored by her beloved grandfather, to the ruthless CEO of an oil empire." Now that the series has been renewed, perhaps the new season will flash forward far into her future — or simply make a bit of a time jump — and leave the Young Eli storyline in the past.

Otherwise, the network hasn't released any hints as to where the series is going. The book The Son doesn't just take Jeannie into her adulthood, but very, very old age. As The New York Times describes, "[the book] spans 200 years, six generations and a great many eloquently evoked downfalls." As Meyer told Cowboys & Indians in the same article, "The book is sort of a blueprint, but this is a different thing. Where we need to move beyond it, we're going to move beyond it."

Season 1 covered the family's brutal origins, and served as a complex portrait of how Eli McCollough became such a hateful man. Season 2 could take that foundation all the way to the 21st century without leaving the book behind. Unfortunately, regardless of how much or how little The Son changes between seasons, it will likely be at least a year before new episodes premiere on AMC.