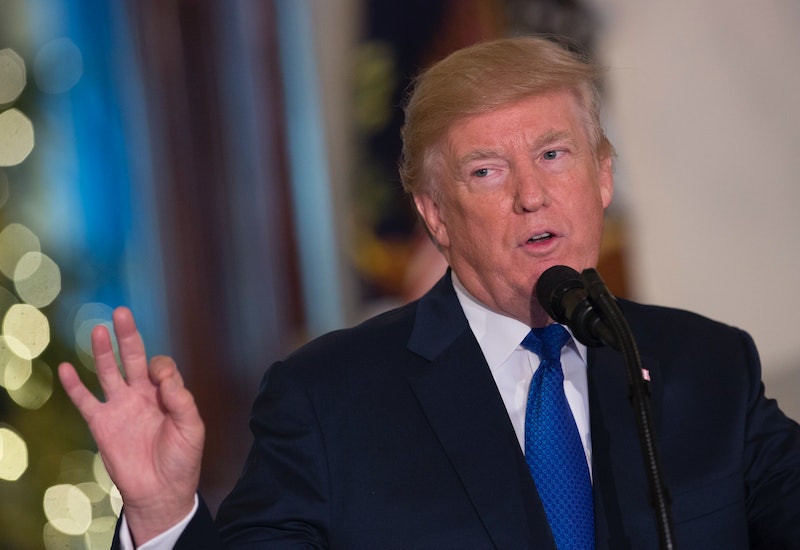 Some really intense political developments took place in 2017, and among those major changes was the passage of the Republican Party's controversial tax plan. For those of you who might be wondering when President Trump's tax plan starts, here's a small but crucial point to remember: although the majority of the provisions in the Republican tax overhaul take effect on Jan. 1, most people won't notice any changes until they file their 2018 taxes in April 2019.

Now that you know the timeline for when the plan takes effect, you can also check out just how much you'll be affected individually. The New York Times created a helpful calculator that allows readers to test how much the GOP tax overhaul will affect the average taxpayer. By analyzing the incomes of 220,000 American households, the calculator gives a realistic picture of where you'll stand once the plan takes effect. A little caveat to keep in mind: that calculator is meant to track personal taxes only. All you have to do is click on the range of income you make, and the calculator will give you an idea of how big of a tax cut you'll get (or not).

The Times also offers a rough picture of how the tax plan will affect most Americans: after the overhaul takes effect this month, most people will see changes to their paychecks in February. "Only a few" of the changes the GOP plan made to the tax system will affect 2017 taxes, according to the Times.

According to Republicans, the tax plan will give middle class American a much-needed tax cut. Such a break could give the average middle class family a 1.6 percent boost in their income, according to the nonpartisan Tax Policy Center — but that's not much compared to the massive cut richer families will get. Compared to that 1.6 percent cut for middle-class households, affluent families could see a reported 3.3 percent boost in their income. Most importantly, that 1.6 percent boost for middle-class families reportedly will end in 2025.

Senate and House Republicans passed the tax plan after several major hiccups in drafting the overhaul and a ton of public pushback. Just before the holidays, Trump signed the $1.5 trillion plan into law. The president praised the efforts to reform the tax code back in October, calling it a radical change. While talking to an Indiana audience at the time, Trump said, "The biggest winners will be the everyday American workers as jobs start pouring into our country, as companies start competing for American labor, and as wages start going up at levels that you haven't seen in many years."

The tax overhaul also was one of the Republican Party's most difficult economic and political undertaking of late, given the vocal opposition from critics. Some economic experts say the tax plan is a destructive move against middle class and working class Americans, because of its massive tax cut for corporations. In one instance, Julie Kashen, policy director at the educational organization Make It Work, told NBC News:

The GOP has proposed a tax bill that is a trillion dollar gift to the wealthiest Americans at the expense of working families. Families need a bold, comprehensive solution. For working families to do better, our policies must do better.

Some economic analysts also argue the tax overhaul will leave a dent in the American economy. Howard Gleckman, an analyst for the Tax Policy Center, told the Boston Globe, "[The Republican tax bill] would raise the level of debt by about $1.5 trillion in 2027 and by about $3.8 trillion in 2037. That additional government borrowing would lead to higher interest rates that, in turn, would reduce private investment. Over time, investment would fall below levels that would occur without the tax bill."

We'll see exactly how the tax plan shakes out in practice in the not-so-distant future. Even though most people will see changes for the first time when they go to file 2018 taxes in 2019, as most of the tax plan's provisions kick in on Jan. 1, the best thing the American taxpayer can do right now is keep an eye and ear open — and use the right tools to estimate how they'll be impacted personally.