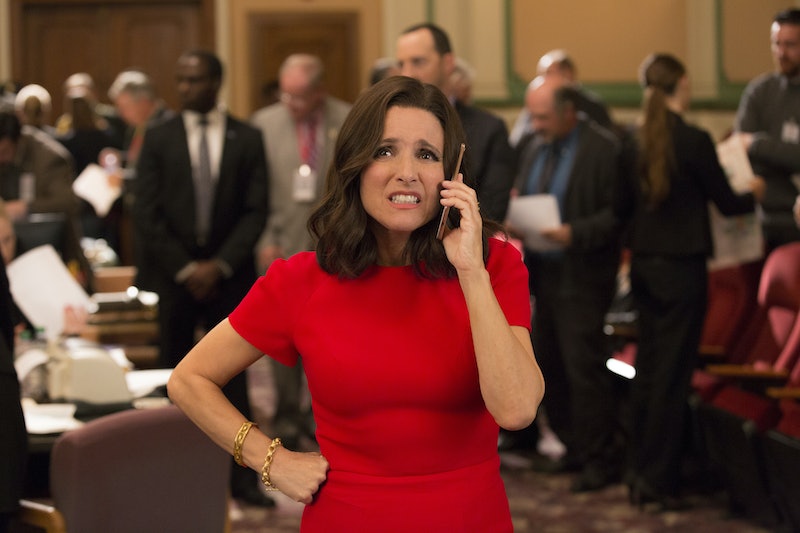 For six years, HBO's Veep has mined comedy from the exploits of a fictional D.C. that feels so real it might very well be exist in a parallel universe just shy of our own. But how much longer can the humor be sustained? Veep will return for Season 7, so Julia Louis-Dreyfus' term as our Comedian In Chief continues. Selina has been out of the White House for a season as of the June 25 finale, but the scathing political satire isn't over yet. HBO renewed Veep for Season 7 back in May, according to Deadline, just as the current season hit its halfway point. And fan can expect the show's most painfully relevant episodes yet when Season 7 premieres in 2018 — most likely in April, as all six previous seasons have done.

But still, the mere fact of the show's renewal begs the question: what happens next? Fans were probably already asking themselves that question when Season 5 ended with Selina's humiliating defeat in the Presidential election, jettisoning her from the White House for good. Season 6 answered that question by tackling problems that likely plague many a POTUS upon the end of their tenure: namely, founding a presidential library, publishing a memoir, and dodging explosive tell-alls about the time they spent as the leader of the free world. (At this point, the series has moved so far beyond its own original concept, even the title Veep sounds quaint.)

But how much of a President's post-presidential life could there possibly be left that's interesting enough to sustain a television series? Although Selina briefly entertained a comeback run for President in the next election cycle, that idea was quickly nipped in the bud early in Season 6; and while it's possible that dangling thread could be revisited in the future, the writers seem more committed to showing what happens after a power-hungry politician has lost power rather than her repeated attempts to regain it.

However, if you're nervous about the future of the series, there's probably very little reason to be. Selina's defeat wasn't the only loss the show has suffered lately, and it weathered both nicely. Veep also recently lost its creator and showrunner, Armando Iannucci (the Oscar-nominated screenwriter of the 2009 British political satire In The Loop), who departed the series after Season 4 in order to focus on his feature film work. And yet, Seasons 5 and 6 have been just as acclaimed as the rest with the fifth — the first without Iannucci at the helm — earning an impressive 11 Emmy nominations, the most of any season of Veep so far. (It won three, including both Outstanding Comedy Series and Lead Actress in a Comedy Series.)

The show has proven itself to be in capable hands with current showrunner David Mandel (Curb Your Enthusiasm)… and the current state of affairs has to be providing the writers with plenty of material that's ripe for lampooning in the upcoming Season 7. (Donald Trump is the best thing to happen to Saturday Night Live, Veep, and absolutely nothing else.) It remains to be seen where else Mandel and the rest of his team will take the show in its new season; but Iannucci himself, who's not even working on the show anymore, can see the potential for plenty of topical storylines — even if he doesn't envy the writers for having to tackle them.

"I'm so glad I don't do Veep any more," the former showrunner said during a panel in Sydney this past May, as reported by The Guardian. "Because I don't know how I'd respond to the situation in America now. I mean, I don't want to bring a downer on the evening, but we are that close to the end of the world."

The funny thing is, the closer we all get to the end of the world… the more hilarious Veep seems to become.