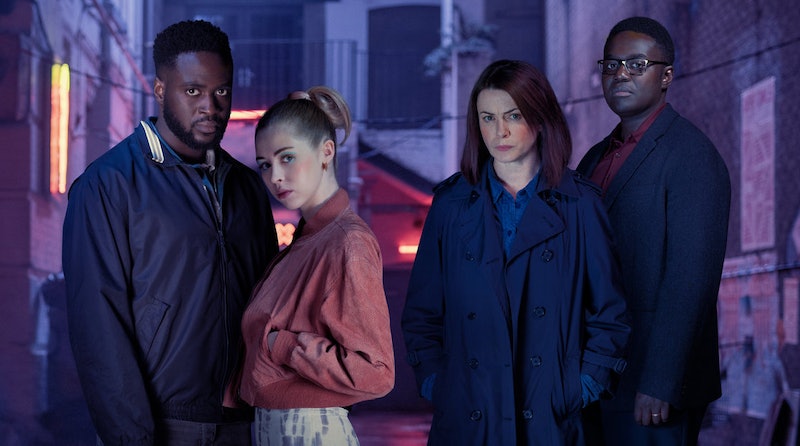 An unlikely detective duo are at the centre of UKTV's latest crime-drama We Hunt Together. The series follows the mismatched pair as they attempt to outsmart two killers on the run, and if this cat-and-mouse story sounds like your cup of tea, here's everything you need to know about We Hunt Together.

When & Where Will 'We Hunt Together' Air?

What Is The Plot Of 'We Hunt Together'?

As the Radio Times reports, the series follows the story of DS Lola Franks and DI Jackson Mendy, a detective pairing who are forced to adjust to their dysfunctional partnership whilst trying to hunt down two star-crossed killers.

The killers in question, known as Baba and Freddy, became embroiled in murder following an attack on a date that wound up turning sour.

We Hunt Together is described as a "gripping twist on a classic cat-and-mouse story," which explores themes including "the intoxication of sexual attraction," and "the dangerous power of emotional manipulation."

Who's In The Cast Of 'We Hunt Together'?

During a recent interview, Ceesay opened up about his latest role, revealing that We Hun Together's "central theme" is what first attracted him to the series.

"The central theme that is of interest to me is this idea of what creates a killer," he explained, before adding "essentially, it's about the damaged that do damage. One of the hardest things that it explores for me is the question of who is to blame. Is there something in these individuals that actually is happiest when they're living at that level of excitement."

"We Hunt Together immediately stood out as a bold and original piece of writing," she commented. "Gaby Hull’s script will take viewers on a wild ride that encapsulates the freshness we are looking for as the Alibi brand matures."

We Hunt Together starts on Wednesday, May 27 at 10 p.m. on Alibi

More like this
Twitter Simply Couldn’t Cope With The ‘Happy Valley’ Finale
By Sophie McEvoy
Claire Foy Spoke Out About 'The Crown's Gender Pay Gap
By Sam Ramsden
Olivia Colman Stars In First-Look Trailer For BBC's 'Great Expectations'
By Sabah Hussain and Sam Ramsden
9 Time Catherine Cawood Was An Absolute Badass In Happy Valley
By Sophie McEvoy
Get The Very Best Of Bustle/UK
Sign up for Bustle UK's twice-weekly newsletter, featuring the latest must-watch TV, moving personal stories, and expert advice on the hottest viral buys.