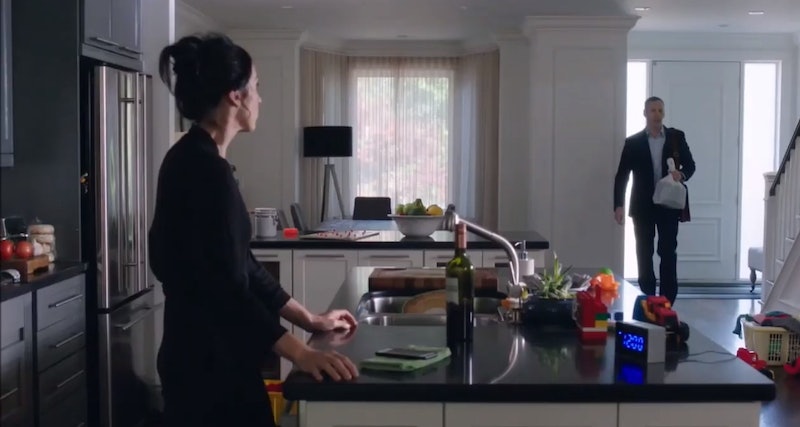 Whereas some TV characters make juggling kids, a career, and a social life look much easier than it is IRL, Workin' Moms delivers an on-the-nose depiction of all the realities of motherhood — yes, including the not-so-joyful parts — to hilarious effect. The Canadian sitcom returns to Netflix for its second season July 25. And if you can't get enough of the show, you'll pleased to know Workin' Moms will return for Season 3 too.

Per CBC, the series' third season finished airing in Canada in March 2019. Obviously, Netflix viewers are only getting access to Season 2 now, just over a year after it originally aired. But Season 1 hit Netflix only five months ago, in late February, so assuming the service continues to stream the show, Season 3 could be available by later this year.

As far as what to expect from Season 2, in the trailer, Kate ponders in front of her friends whether or not she is a good mom. She's spending more time at home, but it's not all she thought it would be: she's seen waiting to drink a glass of wine as soon as the clock strikes noon, only to throw it into the sink when her husband Philip unexpectedly walks in, finding their son coloring on the wall. Later, Kate starts a gig as a creative consultant for a small company, while Frankie is breaking a work no-no and sleeping with her patients.

The group's resident stay-at-home dad Ian, aka Jenny's ex, opens up about seeing a new woman, and the ladies give him a humorous yet necessary talk about consent. The trailer ends with the women putting on stem cell masks and making their trademark dry jokes. It will be interesting to see how this season expands on everyone's story — particularly Jenny, who is noticeably absent from the Season 2 trailer. How is she holding up after her breakup? Will she finally learn to make choices that aren't destructive?

Despite how often others may try to criticize moms about their choices, Reitman said that ultimately, it's about fighting back against that pressure and judgement, and that's what Workin' Moms aims to do. Hopefully, Season 2 will continue to show how these women are defining "good motherhood" on their own terms and leaning on each other for support during tough times.

We may not yet have an exact date for when Season 3 will hit Netflix, but for now, fans can catch back up with their favorite hot-mess mamas for more breastfeeding mishaps and work struggles when Season 2 arrives on Thursday. And hey, why not rewatch Season 1 while you're at it?