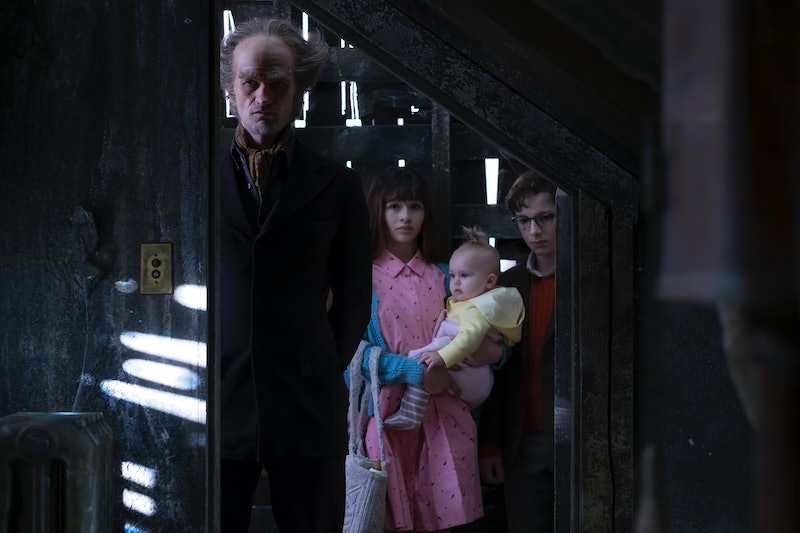 You've read the books, watched the movie and the show, but still you wonder: When is A Series of Unfortunate Events set? Lemony Snicket's writing choices lend his 13-book series a strange and timeless feel that makes tying it to a particular setting rather difficult. There are a few clues to help us figure out when Lemony Snicket's books are set, though, so let's dive in, shall we?

Spoiler Warning: This article includes minor spoilers for Lemony Snicket's A Series of Unfortunate Events books and the Netflix series below.

A Series of Unfortunate Events centers on the three Baudelaire orphans in the years following their parents' death in a house fire. A misinterpretation of Mr. and Mrs. Baudelaire's will leaves Violet, Klaus, and Sunny in the hands of their closest living relative, geographically: their distant cousin, Count Olaf.

Olaf wants to make sure the orphans' fortune — which they will inherit when Violet comes of age — falls into his hands, so he stages a fictional play in which he will really, legally marry his 14-year-old cousin. The Baudelaires are removed from his custody, but he pursues them from home to home, always in a different disguise and with a different scheme to kill them for their fortune.

In Brett Helquist's illustrations and on-screen, the Baudelaires' wardrobe isn't all that anachronistic, unlike other elements of Snicket's series. In fact, a cursory glance over the book covers reveals that most of the costuming comes from the same time period: the 1920s. During that decade, boys wore knickers like Klaus', girls wore sailor dresses like Violet's, and women wore hats and furs like the lady in fuchsia on the cover of The Penultimate Peril. Additionally, Esmé Squalor's obsession with fashion fits perfectly into that decade, although stiletto heels probably weren't invented until sometime later.

So that's it? A Series of Unfortunate Events is set during the 1920s? Not so fast. The technologies represented in Lemony Snicket's books paint a different picture of the Baudelaires' lives.

In The Hostile Hospital, the orphans find The Last Chance General Store after escaping the Village of Fowl Devotees. Among other things, the store sells fiber optic cable and has a telegram service. Later in the novel, the Heimlich Hospital uses an intercom system to send messages from the Director of Human Resources to the staff. While there is some overlap between these technologies, only one, the telegram, was available in the 1920s.

Telegrams were used into this millennium, even though sending Morse code messages fell out of favor in the 1960s and '70s, but fiber optic cable wasn't used widely before those decades. Additionally, the intercom system wasn't invented until the 1930s.

So when is A Series of Unfortunate Events set? There's no good answer to that question. Snicket deliberately blends an early 20th century aesthetic with more modern technologies, giving the Baudelaires' adventures a timeless feeling that fans of all ages love.

Ultimately, it doesn't matter when A Series of Unfortunate Events is set, because Lemony Snicket's books are not historical fiction, and never have been. The absurdist experience is what's important here, and, even though the Baudelaire orphans' lives are filled with sorrow, that's why we love the books today.

More like this
I've Read The Harry Potter Books 30+ Times & This Plot Hole Haunts Me
By Kelsey Stiegman
The Viral 'Little Miss' Franchise Is Focusing On Mental Health Next
By Darshita Goyal
The Biggest Differences Between 'Bullet Train' & The Book It’s Based On
By Arya Roshanian
10 Must-Read New Books Out This Week
By K.W. Colyard
Get Even More From Bustle — Sign Up For The Newsletter