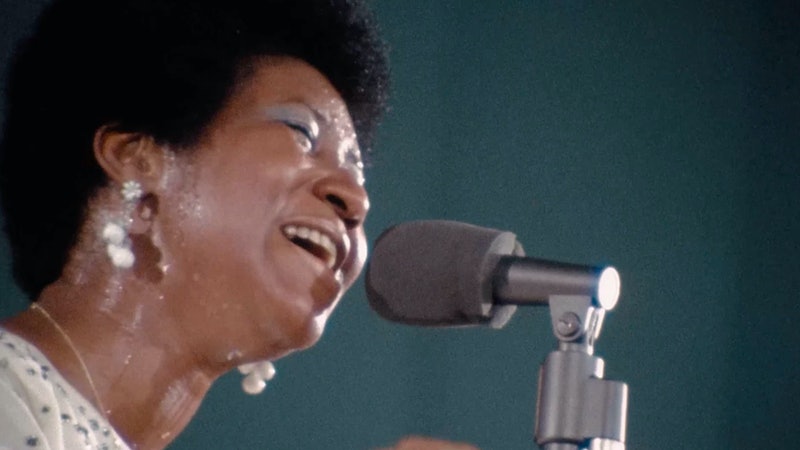 Music documentaries are a wonderful thing. While nothing can beat seeing a musician live you can still experience the wonder and the chills that pure talent can bring to the senses, which is exactly what Amazing Grace has done for me from the trailer alone. Directed by Alan Elliott, this music documentary captures one of Aretha Franklin's most breathtaking performances that has been lost for nearly 50 years, so when will Amazing Grace be out in the UK?

Amazing Grace first premiered on Nov. 12 last year at DOC NYC (a documentary festival in the U.S.) before touring the festival circuit before its April 5 release in the U.S. The film will then make its way onto British shores a month later on May 10, so you don't have long to wait to experience Franklin's breathtaking performance.

Released in 1972, Amazing Grace was Franklin's fourth live album and the best-selling of her career, earning her a Grammy for Best Soul Gospel Performance the following year. Amazing Grace saw Franklin go back to her gospel roots, recording the LP at Los Angeles' New Temple Baptist Missionary Church, as Rolling Stone reports. Introduced by her mentor Reverend James Cleveland, who was also the former minister of music for her father's parish in Detroit, Franklin's performance was recorded over two nights and would later be compared to Michelangelo's Sistine Chapel by executive producer Jerry Wexler. "[The album] relates to religious music in much the same way Michelangelo's Sistine Chapel relates to religious art," he said. "In terms of scope and depth, little else compares to it's greatness.

Franklin's brother Cecil also referred to how the record acted both as a response to his sister's first marriage breaking down and as a response to the overall climate of America at the time. "I see [Amazing Grace] as the sacred moment in the life of black people," he told Rolling Stone. "Think back. We had lost Martin. We had lost Malcolm. We had lost Bobby Kennedy. We were still fighting an immoral war... Turmoil, anger, corruption, confusion."

"We needed reassurance and recommitment. ... So when Aretha helped lead us back to God — the only force for good that stays steady in this loveless world — I'd call it historical."

But for something so historical, why did Amazing Grace take so long to be shown on screen? At the time, Warner Bros. hired director Sydney Pollack to film the live recording for a documentary which until now hadn't been seen for nearly 50 years. According to Vox, this was mainly down to two variables — "technical issues and lawsuits." Firstly, while Pollack was shooting he forgot to use clapper boards (used to assist synchronising sound and film), so the reels remained unfinished despite editors trying to fix the problem. Enter Alan Elliott, a producer and director that originally heard about these "lost" reels in the 1980s and bought the rights for the project from Warner Bros. in 2007. By 2010, synching audio and video could be done digitally so the Pollack's original vision was finally completed.

However, Franklin ended up suing Elliott as she believed the film was "appropriating her likeness without her permission," as Vox reports. The singer did the same in 2015 and 2016. Franklin sadly passed away last August, and Elliott was invited to the funeral by the singer's niece Sabrina Owens. It was there where they discussed the film, and after showing it to 25 members of Franklin's family Owens then agreed to let the film be released.

While it'll never be known as to what Franklin would have thought about Amazing Grace finally being available to see on the big screen, there's no doubt that her legacy will live on for decades to come.