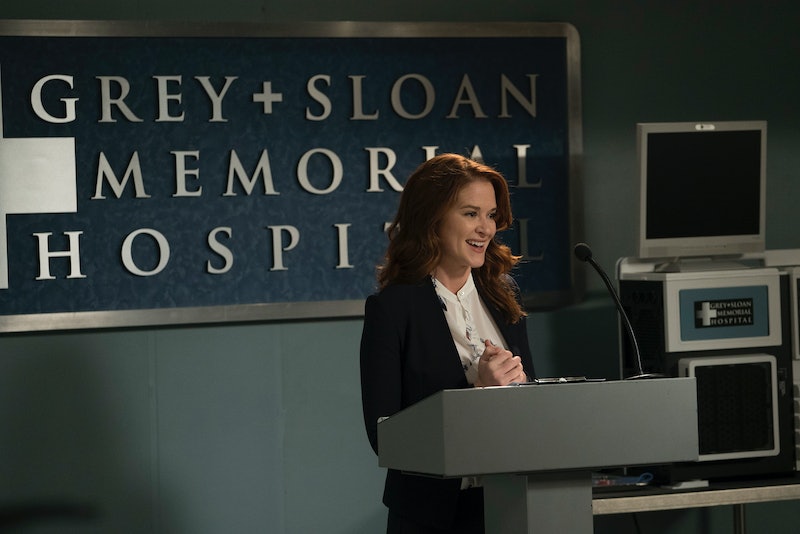 With the news that Sarah Drew and Jessica Capshaw will leave Grey's Anatomy (and April and Arizona, respectively, with them), fans are waiting for the other shoe to drop. Arizona is probably heading to New York to be with Sophia, and April? Well, previews show April getting into an accident, which, in Grey's Anatomy land, could mean the end of April on mortal soil. But when is April's last Grey's Anatomy episode? Don't worry — there's more Kepner story to tell.

Ellen Pompeo, who, you know, is Grey's Anatomy, basically, responded to a fan on Twitter who was mourning April's last episode. It was easy to guess that April would immediately die given the fact that she was in an accident. And, in the previews for the penultimate episode of Season 14, Jackson was wailing and crying (they're the OTP, don't @ me, Jaggie fans). Why else could be Jackson be crying if the true love of his life and the mother of his children weren't dead and this wasn't April's final epsiode?

Luckily, Pompeo is a straight-shooter like Meredith Grey, and she wasn't trying to pretend like this fan theory was correct. Thanks, Ellen, for setting the record straight with this tweet:

The news that Capshaw and Drew were leaving the show was a big shock, but showrunner Krista Vernoff and her team of writers felt that the stories of these characters went as far as they could go. According to Deadline, Vernoff said in a statement:

Shonda Rhimes, the creator of Grey's Anatomy, also issued a statement celebrating the important work of Drew and Capshaw on the show:

"It’s always hard for me to say goodbye to any of my characters. Both Arizona Robbins and April Kepner are not only beloved but iconic — both the LBGTQ and devout Christian communities are underrepresented on TV. I will be forever grateful to both Jessica and Sarah for bringing these characters to life with such vibrant performance and for inspiring women around the globe. They will always be a part of our Shondaland family.”

While we don't know if April lives or dies (oh lord, I'm not ready for the emotions I'm about to have in this episode), there is a bright spot to these "April is leaving" shenanigans. First of all, the actual last episode isn't until May 17. So we have one more week of April.

Secondly, Drew landed a new show for Fall 2018! She'll play opposite Michelle Hurd in the new Cagney & Lacey reboot on CBS. Drew will be Cagney, Hurd will be Lacey and, according to another article from Deadline, the show will serve up the best parts of the 1980s procedural show and "follow the two female police detectives and friends who keep the streets of Los Angeles safe."

I'm happy for Sarah Drew — I am. But a part of me will always miss her as April Kepner. Grey's Anatomy just won't be the same with April's upbeat attitude. She's evolved so much as a character, with her marriage to Jackson and the loss of her son; the birth of Harriet and her loss of faith. Sarah Drew is a treasure — I still think about her performance in "Death And All His Friends," the Season 6 hospital shooting episode of Grey's Anatomy. While this episode may not be the end of the road just yet for April, it's coming soon, and we'll all have to come to terms with it.