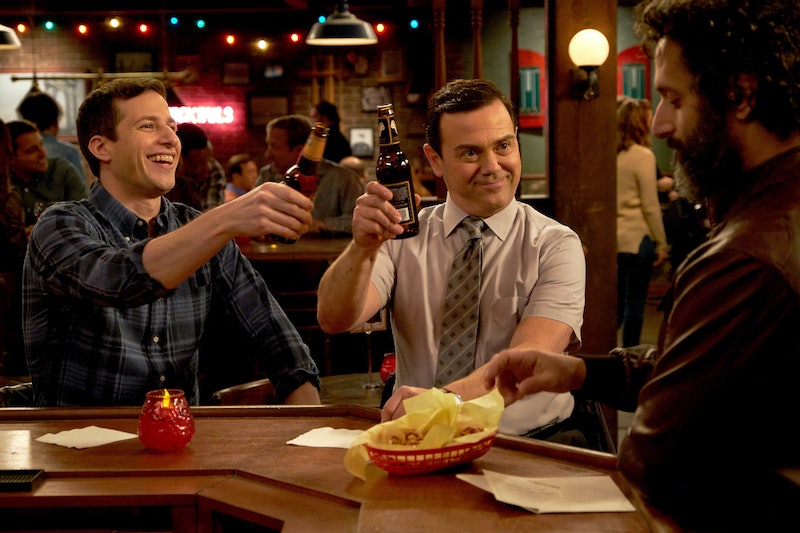 When FOX canceled Brooklyn Nine-Nine on May 10, fans of the cop comedy were heartbroken. Fortunately, NBC swooped in to pick up the sitcom for a Season 6. Now the big question is when is Brooklyn Nine-Nine coming to NBC, and how soon will it happen? Let's take a look at what the network has said so far.

NBC Head of Entertainment Bob Greenblatt has been open about his excitement for Brooklyn Nine-Nine Season 6. He told Variety that it feels like the series is "coming home," and Deadline reports that Greenblatt is proud to have Golden Globe-winner Andy Samberg back on the network "where he grew up." (That's a reference to Samberg's iconic work for Saturday Night Live, where he and his writing partners transformed the show in the early '00s.)

Per Deadline, Greenblatt admitted that had he known Brooklyn Nine-Nine would cast Samberg in the leading role, he would not have allowed FOX to purchase the series back in 2013. He reportedly called the move a "missed opportunity" for NBC, especially since Brooklyn Nine-Nine "fits into [NBC's] brand of comedy, in many ways better than it ever fit on FOX." To be fair, FOX was also initially responsible for comedies like New Girl, The Mindy Project, and Arrested Development, so that might not be entirely fair to say. Either way, though, Greenblatt is obviously psyched to finally have the rights to the beloved series after passing on it originally.

When FOX canceled Brooklyn Nine-Nine, fans went berserk. Support for a renewal poured in on Twitter, with fans and celebrities urging streaming platforms to pick up the show if its initial home wouldn't reconsider. By the time NBC greenlit the next season on May 11, people were convinced it was the work of insistent fans online. Twitter user @klairvoyance even noticed that something similar happened in a recent episode of the series, wherein the precinct avoids closure thanks to "a swell of online support" from one character's Australian Instagram following. Greenblatt wants to assure viewers that this is not the case. In fact, he was more or less lying in wait for an opportunity to snatch up the show. "When the series came to a place where FOX could not keep it on," he explained to Deadline, "NBC jumped on it really quickly." He appreciates that fans chose to “yell and scream” when FOX decided not to renew it, but he maintains isn't what inspired NBC to pick up the show. He says NBC was "already there" in terms of negotiating the move. (But surely the fan support didn't hurt.)

Since they only just acquired it, NBC has not announced a premiere date for the next season of Brooklyn Nine-Nine. However, the network has offered up some fresh information about the upcoming season. So far, the network has announced that Season 6 will be shortened from a 22 episode order to just 13, and it's being held until midseason. With that in mind, fans can likely expect Brooklyn Nine-Nine Season 6 to premiere in January or March of 2019 as a result. For those already looking ahead to Season 7, there's good news on the horizon. Per Deadline, Greenblatt is "not ready to commit," but he certainly wouldn't rule out more seasons. Greenblatt stated that a Season 7 would be "up to viewers and where the show goes creatively," but he personally would want to see more of the Nine-Nine. "There are a lot of business reason for it to continue," he added. "But it's too early to tell.”

NBC also unveiled its official primetime schedule for Fall 2018, which does not include Brooklyn Nine-Nine. The head of entertainment reportedly stated during Upfronts at Radio City Music Hall that Season 6 will see a “triumphant return in midseason." While further details about what that entails are unknown, perhaps the show will find a home on Thursday night's 2-hour comedy block, where the critically-acclaimed The Good Place usually wraps its 13-episode run early. Even without a firm premiere date, it should be a relief to fans that the head of entertainment at NBC loves the show as much as they do. All together, now: Nine nine!

More like this
Nazanin Boniadi Was A Healer Long Before 'The Rings Of Power'
By Olivia-Anne Cleary
Here’s Everything Coming To & Leaving Netflix In October
By Jake Viswanath
Shonda Rhimes' Net Worth Makes Her One Of The Wealthiest People In TV History
By Hugh McIntyre
The Best 'Grey's Anatomy' Intern Moments, From MAGIC to Glasses
By Grace Wehniainen
Get Even More From Bustle — Sign Up For The Newsletter