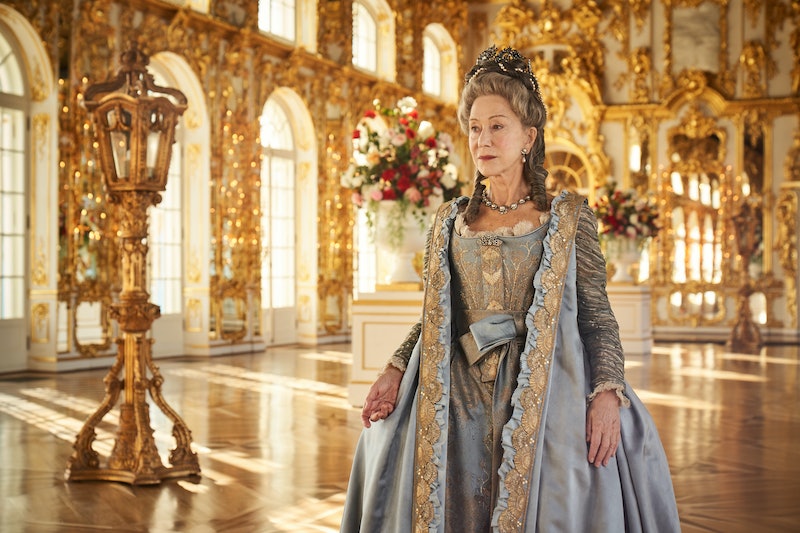 If you're into period dramas, prepare for your next TV obsession. Sky's new mini series Catherine the Great will spotlight the life of an important historical figure, and stars none other than the legendary Helen Mirren in the leading role. Mirren hasn't acted in a historical television drama since 2005, so this new role couldn't be more exciting. This four part drama is set to be pretty spectacular, not only because Mirren is at the helm, but because it'll uncover more about a phenomenal historical figure that few of us know anything about, but when is Catherine The Great out?

According to Digital Spy, Catherine The Great will premiere for UK audiences on Thursday October 3, 2019 at 9 p.m. on Sky Atlantic and you'll be able to stream all the episodes NOW TV, which will make marathon-ing this show super easy. The absolute dream.

Sadly U.S. audiences will have to wait a little longer to catch the show, with the premiere taking place a few weeks later on Thursday Oct. 21. So I would recommend our American readers stay off the net to avoid any pesky spoilers. With Mirren in the starring role, I'm expecting a lot of online chatter about it.

Sky have described the series as follows:

"Catherine The Great is an epic historical romance that delves into the politically tumultuous and sexually charged court of the most powerful female monarch in history. Catherine wielded supreme power throughout Russia for nearly half of the 18th century strong-minded, independent, brilliantly intelligent and sexually liberated, she was the definition of the modern woman."

The network explains that viewers will follow Catherine's "passionate affair" with Grigory Potemkin, whom they describe as "her romantic and political soul mate." The bio continues: "Unable to publicly marry and famously promiscuous, they develop a unique and devoted relationship, overcoming their adversaries."

According to Radio Times, writer Nigel Williams is involved and he previously won an award for Golden Globe and Emmy Award for the 2005 series Elizabeth I that starred Mirren. The Crown Season 2 director Philip Martin is also involved. Woah. With these two behind the scenes, and Mirren also acting as executive producer, I'm expecting a pretty regal series.

Mirren seems to be pretty thrilled about the project saying:

"I am very excited by the possibility of embodying a woman from history who grabbed and then wielded great power. She rewrote the rules of governance by a woman, and succeeded to the extent of having the word Great attached to her name, Catherine the Great."

The red carpet for the premiere of the show took place on Wednesday Sept. 25, and Mirren absolutely rocked it. Metro reports that Mirren didn't walk down the red carpet, instead opting for a sedan chair held up by four men. If that isn't travelling in style then I don't know what is. Mirren was elegantly poised while she was carried down the red carpet, and then the doors of her chariot open, to her sitting in a particularly regal pose. She wore a black bodice and skirt with some striking chunky jewellery, fit for a queen. I'm sure Catherine The Great would approve.