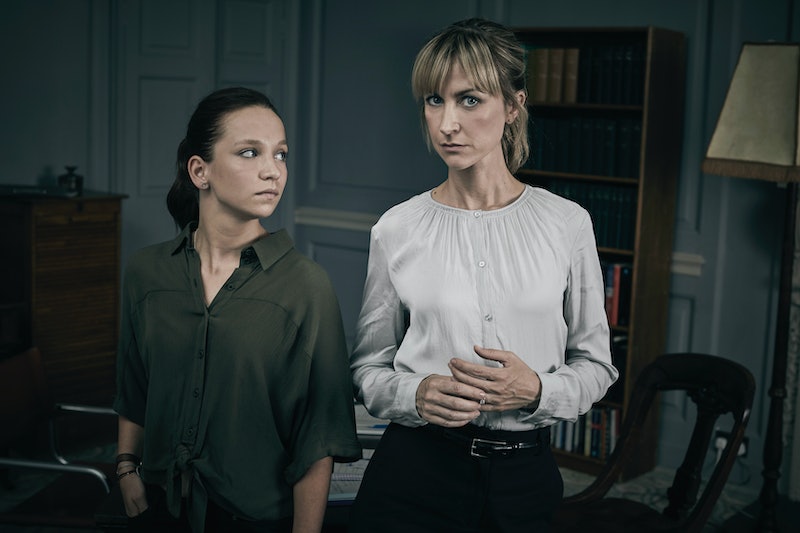 ITV’s new psychological thriller Cheat stars Katherine Kelly and Molly Windsor, and centres around the dangerous relationship between a university professor and her student. The story begins as a simple case of academic deception, but quickly spirals out of control, and leads to potentially fatal consequences. Early information surrounding the four-part drama has led to some high anticipation, but when is Cheat starting on ITV?

Well, viewers don't have too long left to wait for the show's debut, as Cheat will begin airing on Monday March 11 at 9 p.m. on ITV, according to a statement sent to Bustle from the broadcaster. As previously mentioned, the thriller will star Katherine Kelly as university professor Dr Leah Dale and Molly Windsor as her student Rose Vaughan.

According to ITV's statement, the character of Dr Dale has always prided herself on her academic integrity, and she is quick to exercise this after undergraduate Vaughan submits a suspiciously good essay. After the professor calls her student's work into question, a war breaks out between the two characters, which sees Rose retaliate against Dr Dale — who in turn becomes hellbent on exposing her student as a cheat.

The brand new series has been promised to "keep audiences guessing from the start" as it explores "just how far we’re prepared to stand up for what we believe, and at what cost," the Radio Times reports.

Cheat is the work of screenwriter Gaby Hull, and is produced by Two Brother Pictures. The executive producers are Christopher Aird, who has previously worked on Our Girl, as well as Harry and Jack Williams, who both worked on The Missing and Liar. Hull originally intended Cheat to work as a 90-minute movie, reports the Radio Times, however the Williams brothers convinced the screenwriter to rework the script into a four-part series.

During a screening of Cheat in London, the series director, Louise Hooper, spoke about her vision for the ITV thriller. She said: "We wanted to make sure that it was cat and cat the whole time, not cat and mouse," according to the Radio Times. And actress Windsor explained a little more about the lead characters: "I think at the start, both characters underestimate each other, and think that they’ve worked out the other one," she said.

The remainder of the show's cast includes actor Tom Goodman-Hill, known previously for his roles in Humans and Mr Selfridge. Goodman will appear as Dr Dale's Husband Adam in Cheat. Her father, Michael, is portrayed by Peter Firth, who has also appeared in Spooks and Victoria, and the character's mother will be played by actress Lorraine Ashbourne. Rose's wealthy and emotionally abusive father Williams is portrayed by Adrian Edmondson, and Burn Gorman will play the university porter, Ben.

The series was filmed in Cambridge during the summer of 2018, but the university in the series is not actually Cambridge — it's an entirely fictional institution.

According to Glamour, the Head of Drama at ITV, Polly Hill, has expressed her excitement at the new series. She said: "It’s a tense and taut thriller packed with an intriguing plot that promises to have audiences on the edge of their seat." I can't wait.