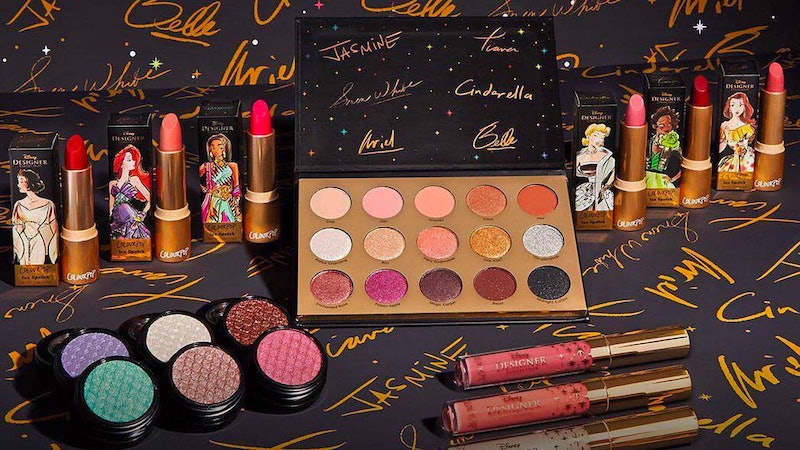 If you're no longer a tween but are still very much into princesses, don't worry, you're not alone. This is evident by the massive amount of hype that ColourPop has received thanks to its new Disney collab, but when is the ColourPop x Disney Designer Makeup Collection available? You won't have to wait too long for the limited-edition line, so start preparing your makeup bag for a little bit of magic.

As the years pass, it's becoming easier and easier to integrate our childhood favorites into our grownup lives. From Lisa Frank making women's fashion pieces, to scrunchies and zigzag headbands having a second heyday, it's never been easier to hold onto your childhood while still being grown. And that now extends to princesses — who says you can't pay bills and still get dreamy about wishing upon a star?

The collection will be available starting Sept. 28, on ColourPop.com and ShopDisney.com, and it will include a whopping 18 products that you can shop, including everything from classic lipsticks to fairy tale inspired eyeshadow palettes. Specifically, there are six creme lipsticks, three lip glosses, one eyeshadow palette, and six separate shadows. The packaging itself isn't your usual Disney aesthetic, where the princesses aren't wearing the dresses and hairstyles that they are known for. Instead, ColourPop gave them a red carpet twist, making them look like modern women that have their makeup-bag-game down.

There are plenty of ways you can rep your favorite Disney heroines through this collection, where, for example, you can choose a lipstick shade that is inspired by a particular princess. If you're Team Tiana you can pick out a burgundy red, or if you're Team Jasmine there is a bright coral pink waiting to be snapped up.

The other products have clever names that are Disney inspired, which will have your inner fan-girl clapping. An ivory pearl eyeshadow with glitter flecks is aptly named "Heigh-Ho," which makes you think of the diamond mines that Snow White's dwarves work in, and a berry pink with blue undertones is dubbed "Be Our Guest," which mimics the color palette of the song scene, where the great hall in the castle is lit up with pink, purple, and blue lights.

Be Our Guest
ColourPop

The same kind of playful forthough went into the palette, which is called "It's a Princess Thing," and retails for a reasonable $20. The 15 pan shadow palette is inspired by the iconic Disney princesses, and have shadow names that are as fun as the actual colors themselves.

"Chip" is a matte soft beige nude, and is the same shade as the magical bone-china-boy. "Thingamabob" is a vibrant metallic silver (the same shade as a fork,) and "Magic Carpet" is a blackened plum. Then there is "Ray," which is a metallic champagne and is meant to honor the old lightning bug that helped Tiana, and "Midnight Curfew" is a black shade sprinkled with silver glitter that makes you think of magical late nights and falling in love at the strike of midnight.

It's A Princess Thing
ColourPop

Mark your calendars, because this drop is just around the corner and won't last long!