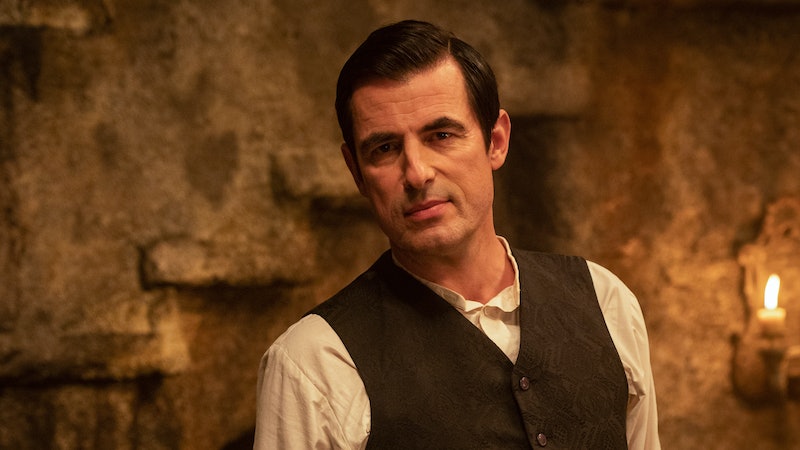 An iconic character from the world of literary horror is about to be resurrected in the upcoming BBC and Netflix production, Dracula. As the show's title suggests, the new series tells the story of Count Dracula, and follows the infamous Transylvanian vampire as he sets his sights on the city of London during the Victorian era. The upcoming series is co-written by the makers of Sherlock, and Danish actor Claes Bang will star as the leading role. But when is Dracula out on the BBC and Netflix?

Well, viewers don't have too long left to wait, because as the Radio Times reports, Dracula will debut on New Years Day at 9 p.m on BBC One. The new series will air on three-consecutive evenings, concluding on Friday, January 3, and if you happen to miss the series first time around, Dracula will also be made available to stream on the BBC iPlayer. After first airing on BBC One in the UK, international viewers can later expect to find Dracula on Netflix. Radio Times reports that they understand "the streaming giant intends to release all three episodes on the first weekend of 2020."

Filming first began earlier this year at Orava Castle in Slovakia, and production then moved over to Blighty, where filming continued at the famous Bay Studios in Swansea. The brand new adaptation of Dracula is co-produced by the BBC and Netflix, and written by the makers of Sherlock, Mark Gatiss and Steven Moffat — who is also set to star in the new series. Speaking of his new TV gig, Gatiss said, "I’m running out of childhood dreams to come true. And what a delight to join this fantastic cast. The children of the night!," whilst co-writer Moffat praised Dracula's "amazing" new cast. Speaking to the BBC, he said, "So exciting to see an amazing new cast start to assemble, I hope Claes (Bang) doesn’t eat them all."

According to the Express, Danish actor Claes Bang will appear in the TV adaptation as the haunting Count Dracula, and Netflix's Vice President of Content Acquisition, Larry Tanz, has already praised Dracula's leading man. In a statement, he said, "Claes will bring Dracula to life with chilling charm and evil elegance. With his talents and Steven and Mark's brilliant storytelling, Netflix members around the world will love to fear this dark and complex anti-hero." And Dracula co-writers, Moffat and Gatiss, also appear to be more than confident with Bang's acting chops. As reported by the Express, the pair said, "It was one of those moments — who else could it be than Claes! He has it all. Brilliant, gorgeous, charismatic, lethal. Tall, dark and gruesome all at once. Hell has a new boss."

According to the BBC, the new series will also star Black Mirror's Jonathan Aris, The Great actor Sacha Dhawan, Misfits star Nathan Stewart-Jarrett, Doctor Who's Catherine Schell, Game Of Thrones actor Clive Russell, and more. Although we're yet to receive an official launch date of what promises to be a brilliant addition to TV drama, Dracula will at some point arrive on BBC One for an epic three-part series. And I, for one, cannot wait.

More like this
WAGatha Christie The Series Is Officially... Coming To TV
By Maxine Harrison
Nicola Coughlan Just Revived 'Derry Girls' In The Most Unexpected Way
By El Hunt
'Bridgerton' Newbie Hannah Dodd Has Thoughts On Colin and Penelope’s Love Story
By Bustle UK
New ITV Drama Maternal Is Lifting The Lid On Life As A Woman In The NHS
By Catharina Cheung
Get The Very Best Of Bustle/UK