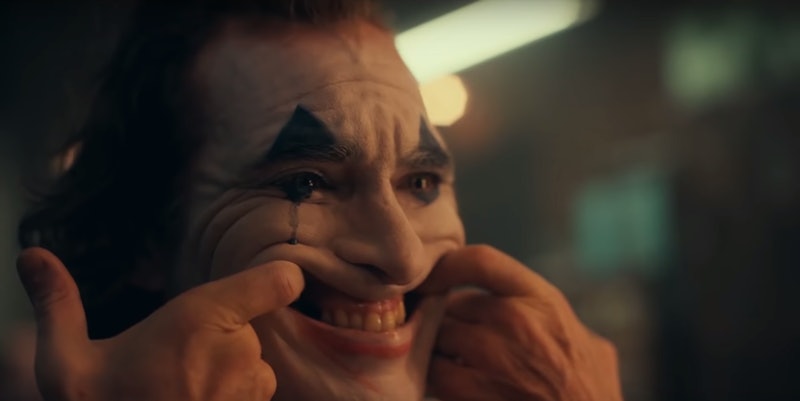 The trailer for the upcoming psychological thriller Joker recently dropped, and fans are already looking forward to Joaquin Phoenix's take on the iconic Batman villain. The film will be set in 1980s Gotham City, and tell the story of a failed stand-up comedian's dark descent into a life of crime as he morphs into the menacing Joker. But when is Joker out in the UK?

According to the Mirror, Joker will be released in UK cinemas on Friday, October 4 2019. The Academy Award-nominated Joaquin Phoenix will portray the iconic character, which has previously been played by the likes of Jack Nicholson, Mark Hamill, and the late Heath Ledger — who went on to win an Oscar for his portrayal. The film will be directed by Todd Phillips and produced by Martin Scorsese, reports Digital Spy, and in an official statement from Warner Bros., the film's story is described as "an exploration of a man disregarded by society [that] is not only a gritty character study, but also a broader cautionary tale."

As previously reported, Joker will follow the character of Arthur Fleck (Phoenix). According to the Evening Standard, Fleck is a lonely stand-up comedian who is attacked by thugs on the streets on Gotham City. After being assaulted at work, and on the city's subway, Fleck begins a downward spiral into the criminal world, which leads to him transforming from a subject of abuse into the formidable Joker.

The film's director has commented that Joker is "still taking shape," reports Deadline, and has addressed online speculation surrounding the origins of the iconic Batman character. When discussing fan speculation, Phillips revealed that "most of it hasn’t been very accurate. I guess that’s what happens when you set out to do an origin story about a character that doesn’t have a definitive origin." And when providing a definition of the film's genre, Phillips said, "Well, it’s a tragedy," — which mirrors the Joker's final words heard within the recently released teaser trailer. In the clip, Phoenix's character says, "I used to think my life was a tragedy, but now I realise it’s a comedy."

According to Indiewire, De Niro, who plays Murray Franklin in the upcoming release, has commented on the comparisons made between his Joker character, and his previous role as the psychopathic comic Rupert Pupkin in the 1982 film, The King of Comedy. During interviews for the upcoming Tribeca Film Festival, the 75-year-old said, "There’s a connection, obviously, with the whole thing. But it’s not as a direct connection as the character I’m playing being Rupert many years later as a host."

Joker hits UK cinemas on Friday, October 4, and if the gripping new trailer gives us any indication, the film is going to become one of the year's must-see releases. I can't wait.