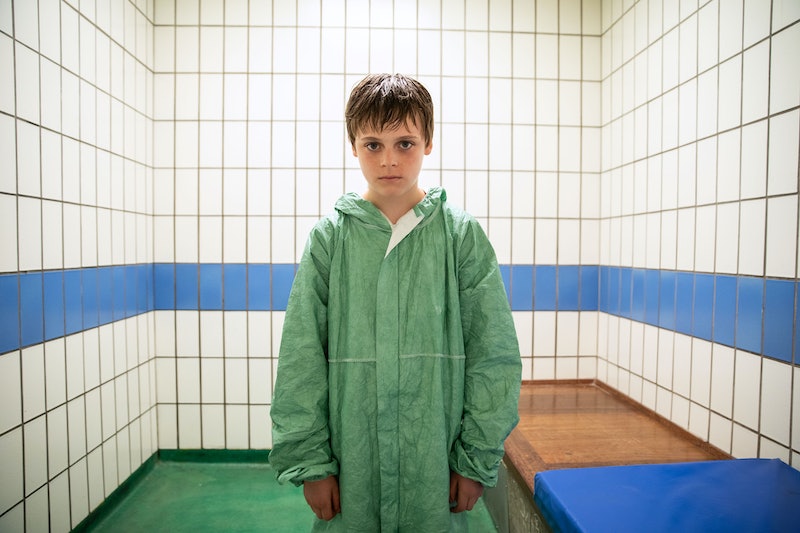 The harrowing true story of a 12 year-old boy facing a murder trial will be depicted in BBC Two's newest drama. Responsible Child follows the story of two brothers, both of whom are arrested after stabbing their mother's partner and, in addition to delving into this shocking tale, the series will take viewers inside the young boy's experience of the UK legal system. But when is Responsible Child coming to BBC Two?

According to the BBC, those looking forward to the drama are in luck, because Responsible Child is set to air on Monday, Dec. 16, at 9 p.m. on BBC Two. The series is centred around 12 year-old Ray, who is put on trial for murder after stabbing his mother's partner with older brother Nathan. Despite his early years, the age of criminal responsibility in England and Wales is 10, meaning Ray is forced to stand trial in court as an adult. As the Radio Times reports, the show appears to be loosely based on a real-life 2014 case involving two brothers and the killing of their stepfather.

The story will be told in two different time frames, which include the events that led up to the murder and the drama which unfolded during the trial. And, as well as displaying Ray's run-in with the legal system, the show will bring powerful questions based around responsibility and redemption to the forefront.

As the Radio Times reports, the cast of Responsible Child includes child actor Billy Barratt as young Ray, The History Boys star Stephen Campbell Moore, Souvenir's Tom Burke, Game Of Thrones star Michelle Fairley, and more. The one-off drama is directed by the BAFTA-winning documentary maker Nick Holt, who revealed the story of Ray is one he's "wanted to tell for a long time." Holt also attended the actual trial on which the drama is based, and described the age of criminal responsibility in England and Wales as "an extraordinary and little-known aspect of our justice system."

Responsible Child airs on Monday, December 16, at 9 p.m. on BBC Two, and I cannot wait to explore this gripping real-life story.

More like this
This First Look At 'The Gold' Shows Jack Lowden In A Whole New Light
By El Hunt and Sam Ramsden
A New Netflix Doc Will Explore The Unsolved Murder Of Jill Dando
By Sam Ramsden
'The Last Of Us' Has Officially Been Renewed For Season 2
By Darshita Goyal
'Abbott Elementary' Fans Probably Missed This 'Parent Trap' Easter Egg
By Sam Ramsden
Get The Very Best Of Bustle/UK
Sign up for Bustle UK's twice-weekly newsletter, featuring the latest must-watch TV, moving personal stories, and expert advice on the hottest viral buys.