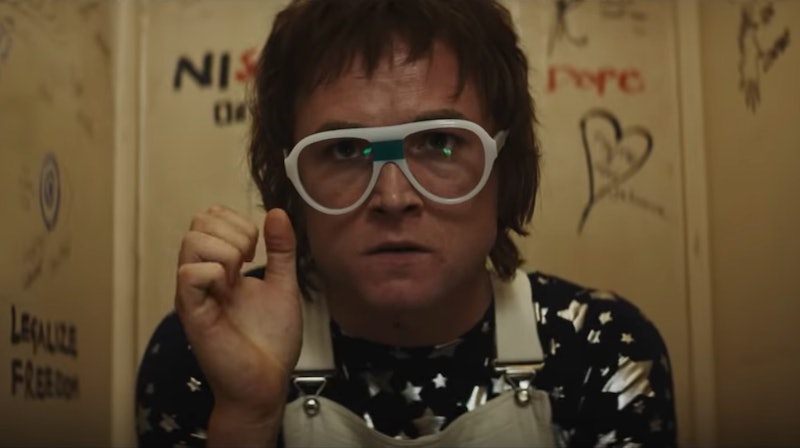 The upcoming biopic Rocketman tells the story of one of the world's biggest music icons, Sir Elton John, and is set to hit cinema screens next year. After the release of the first trailer, fans of the legendary musician are seriously looking forward to the impending release date. But when is Rocketman out in the UK?

Well, according to the distribution company behind the movie, Paramount Pictures, Rocketman is due to be released in the UK on the 24 May 2019 — a week after its U.S. release. The film stars actor Taron Egerton, who has previously appeared in Kingsman: The Secret Service, and offers moviegoers an extensive look into Sir Elton John’s rise to fame. Rocketman is also thought to be a pretty accurate portrayal of the "Candle in the Wind" singer's life, due to the involvement of John's husband David Furnish, who worked as a producer on the film. Adding to the authenticity is the "Rocketman" himself, who boasts an executive producer credit, according to the Guardian.

As previously reported, the role of Sir Elton John has been taken on by British actor Taron Egerton, who's real singing voice has been used throughout the final cut. The filmmakers decided to use the actor's vocals after Egerton managed to impress one of Rocketman's producers, Matthew Vaughn. And according to the Metro, the 29-year-old also took a shot at learning the piano for the role, however this proved much more difficult than he anticipated. Speaking on the U.S. chat show Jimmy Kimmell Live, the actor said "I made a real effort. As it turns out, it’s very difficult."

When discussing what people can expect from Rocketman, the film's director, Dexter Fletcher, told the Daily Mail "It's about Elton navigating personal and family relationships. He looks for love in all the wrong places, he abuses himself with drugs and booze – yet he's a genius who has survived for over half a century in show business." And one of the film's producers, Matthew Vaughn added "This film is going to make people's jaws hit the ground, Elton just said 'Tell it all. Go as R-rated as you need to.' And we do just that, with his blessing. The flaws and the genius are all there."

Upon the announcement of the biopic, the film's lead shared an uncanny photo of himself online, which displays him portraying Sir Elton. The actor shared the photo on Twitter with the caption "Can’t wait for you all to see the trailer Monday. Words cannot describe how proud and excited I am." And a description of the movie, found on Rocketman's official Twitter page, states that the film is "an epic musical fantasy about the uncensored human story of Sir Elton John’s breakthrough years."

With Sir Elton's unmatched discography and hands on involvement in the project, it's starting to look like Rocketman could be one of the biggest film's of 2019. And I cannot wait to go see it.