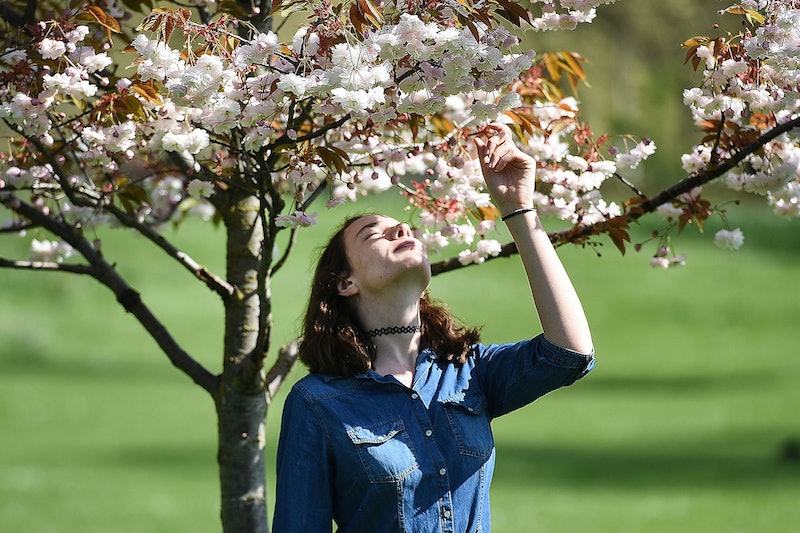 As I write this, I'm sitting beside a window that offers a view of the surroundings outside my home, which are all covered in snow. But according to the thermometer, it's a springy 50 degrees Fahrenheit outside, which means that snow shouldn't be sticking around for long — or that seasons are a free-for-all and totally unreliable markers of what's actually going on outside with the weather. Though we might not know when spring (as we know it) will arrive, we do know when the Spring Equinox in 2019 is, because that comes around the same time every year — sun or snow.

While flowers can bloom in February, and while snow clan linger until May, the actual equinox will always come around the same time. Aka, it doesn't give a damn about the weather because it has nothing to do with it. In New York alone, snow has fallen on the first day of spring over seven times in the last 20 years. And yet, all the same, the spring equinox arrives and eventually the weather gets the hint, and the flowers come out in full bloom, without any threat of being covered by snow.

The Spring Equinox, also known as the Vernal Equinox, will arrive on Mar. 20 at 5:58 p.m. ET in the Northern Hemisphere in 2019 — and in general, it can occur anytime between March 19 and March 21. Because it takes the Earth about 365.25 days (on average) to go around the sun, each March equinox occurs about six hours later than the previous year's March equinox.

So while this year's Spring Equinox is on Mar. 20, next year's spring equinox is on March 21 because the added six hours pushes it in a new date. The equinox isn't a daylong event, it actually just defines the moment the sun is positioned directly above the Earth's equator, and that moment also won't fall on the same day for people living on the poles and in the Northern and Southern hemispheres.

At the South Pole, the sun hasn't gone down for six months, so the equinox will mark the moment that the sun finally dips below the horizon and stays out of the sky for the following six months. Alternatively, the North Pole will switch from non-stop darkness to nonstop sunshine. As for the Northern and Southern hemispheres, the equinox will mark the moment they both receive an equal amount of sunshine and darkness. Fun fact: equinox means equal night —"equi" meaning "equal" and "nox", meaning "night". On March 20, 2019, we can look forward to perhaps the most balanced day of the year so far, which also happens to fall on a full moon in Libra. (Talk about balance, Libra is the queen of balance!)

While the Vernal Equinox kicks off the astronomical first day of spring, the meteorological first day of spring is a bit more elusive. Come March 21, spring will technically be in effect, at least when it comes to the calendars. But we don't typically acknowledge spring the season until the average temperature rises for a period of time. That said, you better believe I'm pulling out my cut-offs from the back of my closet and reintroducing my feet to the outside world. Goodbye chunky sweaters and wool socks, hello early spring days spend shivering in t-shirts and sock-less loafers.

More like this
Why Experts Say Sleeping With A Fan On Isn’t Totally Risk-Free
By Sophie McEvoy
The 6 Best UV Umbrellas, According To A Dermatologist
By Rachael Green
The 8 Best Indoor Door Mats For Your Home
By Jenny White
Your Daily Horoscope For August 10, 2022
By Mecca Woods
Get Even More From Bustle — Sign Up For The Newsletter