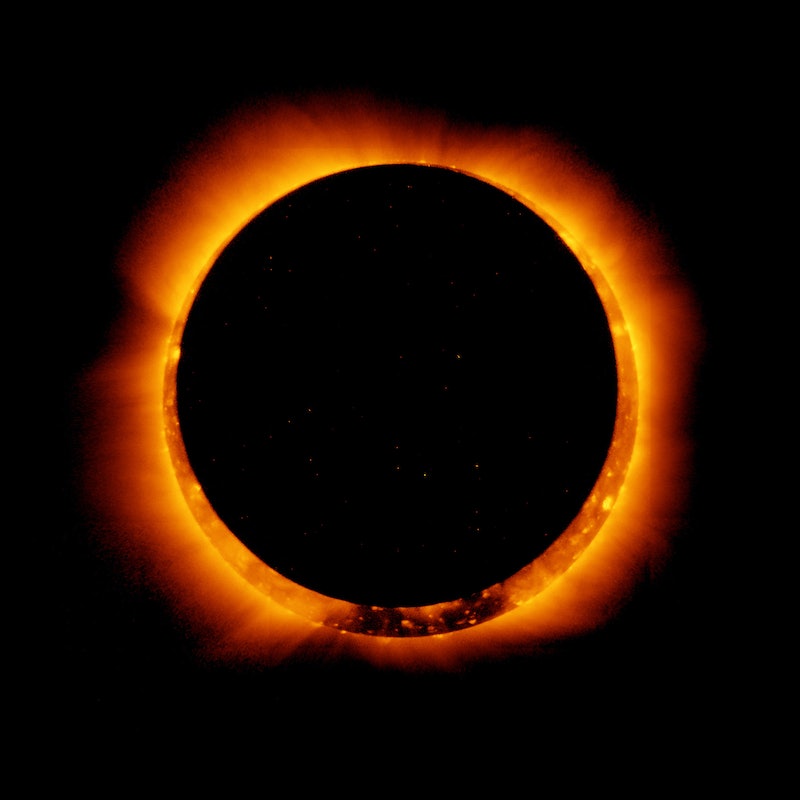 A breathtaking annular solar eclipse doesn't come around all too often, but when it does, it's sure to captivate those of us who remember to look up at the night sky. So when is the annual solar eclipse in 2017? You'll need to mark the date down in your calendar (although it depends where you're based), because you won't want to miss what is, in my opinion, the best type of solar eclipse: Feb. 26 is going to be a night to remember, as long as you're in the right location.

Broadly speaking, an eclipse occurs when the Moon comes between the Earth and the Sun, partially or fully blocking out some of the Sun's light. For anyone wondering what makes the annular one special, allow me to explain so you can get just as hyped about it as me. There are actually four different eclipses that can grace our skies at various points throughout the year: Total, partial, annular, and hybrid. Different types of eclipses occur because the orbits of both the Earth and the Moon are elliptical, meaning they're not perfectly circular.

As Time And Date noted, the Moon's shadow isn't big enough to cover the whole of planet Earth, so the annual solar eclipse is always limited to a certain area. This year, you'll unfortunately only be able to catch sight of the live eclipse from South America and parts of Africa. Those of us in the United States, Europe, Australia, and elsewhere will have to wait until some of the most stunning photos of the annular eclipse make it to social media (or look for a livestream). You can also get involved by seeing how the eclipse could affect your astrology, though.

There's one annular solar eclipse and one total solar eclipse every 18 months or so somewhere on planet Earth, so hopefully we can catch the next one in our skies fairly soon.

More like this
Why Experts Say Sleeping With A Fan On Isn’t Totally Risk-Free
By Sophie McEvoy
The 6 Best UV Umbrellas, According To A Dermatologist
By Rachael Green
Your Daily Horoscope For August 17, 2022
By Alexandria Lettman
How To Turn WhatsApp Read Receipts Off
By Emma Carey
Get Even More From Bustle — Sign Up For The Newsletter