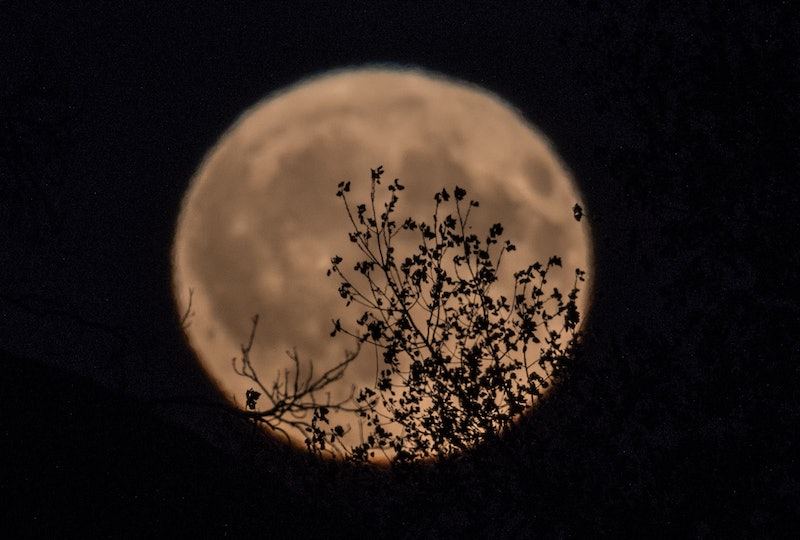 Legend has it the full moon plays a role in everything from mental health, to mood, to luck, to fertility. While seeing a black cat on a moonlit night may not really affect how well your upcoming date goes, in reality, ideas about the moon impacting everyday life have some scientific basis. It is a well-established fact that the moon phases impact tides, and one study even linked an increased rate of admittance to hospitals with the moon phases. If you're on the alert, you're probably wondering — when is the April 2018 full moon?

A full moon (as well as its opposite, the new moon) typically occurs once per month during a calendar year. The next full moon can be expected on Sunday, April 29, exactly two weeks after the last new moon on April 15. So far this year all things lunar have been a little atypical, as January saw two full moons, and February experienced a dark moon. This upcoming full moon is not anticipated to be as abnormal as some of the celestial activity seen so far this year, but its name is reminiscent of a certain millennial hue.

Like the blue moon, a "pink moon" — the moon that will be visible on April 29 — does not actually resemble the color for which it was named, According to the Farmer's Almanac, pink moons are named after the flowers that grow in the United States and Canada during the springtime. In some parts of the world this lunar phenomenon is also referred to as an egg moon or fish moon, due to the influx of shad fish that swim upstream during this time of year. Unfortunately, the moon does not resemble a fish or an egg, either (though how cool would that be?).

Those on the East Coast of the United States will have the chance to see a nearly full moon around the time they eat dinner — around 7:30 p.m, according to Space.com. The moon and sun will even share the sky for a short period of time in New York, due to the sun setting twenty minutes after the moon rises.

But how will *you* feel it? Astrologically, that is? The full moon in Scorpio is expected to be a reprieve from some of the strange, unpleasant energy you may have felt from both Mercury and Saturn experiencing retrograde one after the other. "The April 29 full moon now brings the stability and security to crystallize recent changes and make them permanent improvements," Astrology King explains. "This is a good full moon for making new partnerships binding, formal and legal. It is a good full moon for tradition, ritual and ceremony."

The typical lunar cycle, or lunation, rather, occurs over the course of approximately 29.5 days, per the United States Naval Observatory. It begins with a new moon, when the moon is positioned between the Earth and sun, when the bright side of the moon is facing away from earth. This leaves none of its face visible to those on Earth. The cycle concludes with a full moon, when, alternatively, the ENTIRE face is illuminated.

For those of us star — er ... moon-gazing, the moon looks pretty full the day before and the day following the actual full moon. The full moon's appearance also depends on where the moon is in its orbit around the Earth, which explains the full moon can occur during the daytime in certain locations. But this pink full moon in particular will take place in the evening.

2018 is turning out to be a year filled with astronomical wonder. If you felt a spiritual shift during last month's Super Blue Blood Moon, chances are you will again with February's Dark Moon.