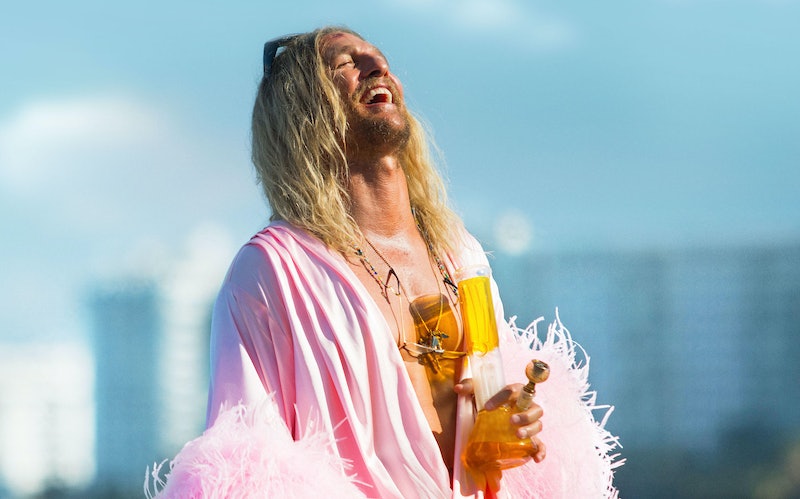 Some films get you right from the trailer. Especially when they have a kickass cast, lots of japes, and — of course — Matthew McConaughey. So, once you see the trailer for The Beach Bum, you will fall hook, line, and sinker and start formulating a shortlist of friends you want to go see it with. But before you make plans, it might be worth finding out: when is The Beach Bum out in the UK?

Sadly, as the Independent reports, The Beach Bum is yet to receive a UK release date, but it is set to premiere at South by Southwest in March 2019. So it'll be here sometime after that, one imagines. The cast alone is enough to get excited about, but the film's storyline looks pretty lit too. It's the tale of a bit of a stoner called Moondog, who also happens to an exceptionally talented writer. The Beach Bum follows Moondog (McConaughey) and his crew living their lives and being extra to the max.

Along with a serious amount of illegal activities, the film features planes, trains, automobiles, and a particularly revolting "bro" beard on Zac Efron's flawless face. A beard that proves, yes, even Efron can be made to look less-than-perfect by the wrong kind of facial hair.

The film comes from the mind of director Harmony Korine, who also directed the pretty iconic movie Springbreakers. Korine spoke about the experience of shooting the film when he appeared at The Key West Film Festival back in November, Indiewire reports. Seemingly the film is going to have low key The Big Lebowski vibes and the character Moondog sounds like a bit of a sort of lovable rogue. When speaking about working with McConaughey, Korine said:

"A lot of the time we were just filming him drinking and peeing. That’s probably one of the purest things you can do simultaneously as a human — drinking and peeing. So we wanted to tap into that, the essence of his character, someone taking in and putting out all the time. Sucking in a world and peeing it out."

And Harmony revealed that Moondog is kind of an exaggerated version of how people view McConaughey:

"I always like playing with the real actor persona, the pop persona, what’s authentic to the person, and then push it out to the stratosphere. He plays with the idea of what people imagine him to be, and kind of takes it into another radical direction."

Living legend Snoop Dogg also appears in the film, and initially was supposed to play himself. However, after reading the script, the rapper told Korine that he had one fairly amazing change to make. According to Indiewire, Korine recounted the conversation he had with Snoop: "He called me and said ... 'I want to be called Lingerie. They call me Rie, short for Lingerie, because I’m smooth and silky.'"

McConaughey, Efron, and Snoop are accompanied by female comedy goddess Isla Fisher, who has come a long way since Home And Away and fully brings the LOLs wherever she goes. Jonah Hill and Martin Lawrence also feature in the star-studded cast.

This film will hopefully be rolling in just in time for summer, fingers crossed!