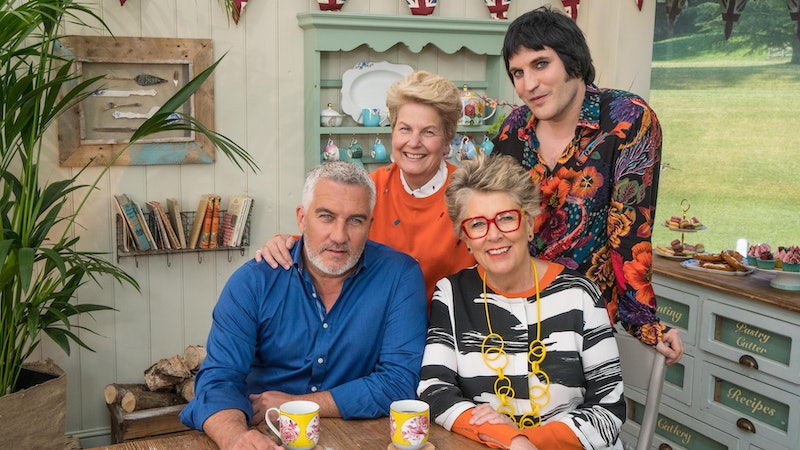 The GBBO Christmas episode has become as much a seasonal staple as your nan's pudding. No doubt you'll need your mince pies and brandy butter at the ready, as there's no way you'll be able to get through this one without snacking along. That means plenty of preparation for the most frosted event on the TV calendar, as past contestants are back for another year to court Prue and Paul with their cakes. Now that it's just around the corner, you and your guests will want to know — when is the GBBO 2018 Christmas special?

This time around it'll be a proper Christmassy affair, as the show will air on Christmas Day on Channel 4 at 8 p.m. — plenty of time for the Christmas dinner to go down. The official Bake Off website posted the air date on Dec. 11, but if this is your first time hearing about it, then there's even more good news to come.

There won't just be one, but two GBBO Christmas specials. I'm glad they realised just how much I've been counting on GBBO to fill up my Christmas TV schedule. According to the site, you'll get the first special on Christmas day, and the next on New Year's Day, at the slightly earlier time of 7.40 p.m. I couldn't think of a better way to start 2019.

There'll be a different set of past contestants on each episode, with Christmas Day's seeing series eight’s Liam Charles and Flo Atkins as well as series seven’s Andrew Smyth and Jane Beedle battling it out to be crowned the tinsel flecked Star Baker. While the episode on New Years Day will see the return of series eight finalist Steven Carter-Bailey, series seven winner Candice Brown, series six finalist Tamal Ray, and series five’s Kate Henry.

It really could be anyone's game on both counts, as it seems like these past contestants have kept themselves super busy brushing up on their baking skills since their time on the show. Liam Charles has become a very regular face across the cake making circuit, and he's even taken up the role as co-host to comedian Tom Allen on Bake Off: The Professionals.

You'll have seen a lot of previous winner — and potential Christmas winner — Candice Brown, too. Since winning series seven, Brown's gone onto whip up some delicious looking treats on ITV's This Morning, as well as throwing a bit of a curveball by appearing on Dancing on Ice at the beginning of 2018.

Of course, Prue and Paul will be returning with bells on (literally — or some kind of festive attire, at least), alongside presenters Sandi Toksvig and Noel Fielding, the year-round wearer of jumpers just zany enough to be classed as Christmassy. So don your jazziest jumpers, make your best pies, and argue with your guests over who your favourite to win is. GBBO just makes the most wonderful time of the year even more wonderful.