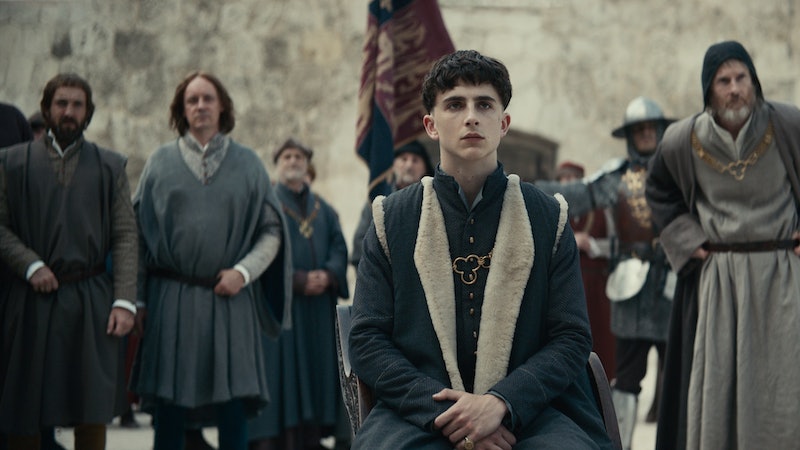 With awards season on the horizon, there are so many great films being released. And Timothée Chalamet fans will be looking forward to one in particular. So, when is The King released on Netflix UK? The Shakespearian drama starring Chalamet and Lily-Rose Depp is coming very soon, so prepare yourself for some serious scandal and betrayal.

With a wayward prince, impending war, and aides who are ready to stab our protagonist in the back at any time, The King sounds seriously gripping. It's based on several plays from William Shakespeare's Henriad and is directed by David Michôd, who is best known for directing the crime drama Animal Kingdom and dystopian flick The Rover.

For Chalamet super fans out there, there's good news. As The King is being distributed by Netflix, you’ll be able to catch it on the platform pretty soon after its selected release in cinemas. It made its world premiere at the Venice Film Festival on Sept. 2 and will air in some cinemas around the UK from Oct. 11. However, fans won’t have to wait too long as it will be up on Netflix UK to watch from Nov. 1.

Chalamet plays the central character in The King — King Henry V — who's forced onto the throne after his father's untimely death. With war and chaos brewing just outside the palace doors and just as many enemies in his council, the new King has to work out who to trust. As well as trying to deal with the mess that he’s been left with, the King has to tackle the emotional demons of his past.

Fans of Chalamet are in for a shock as King Henry V is like no other character he's played before. That haircut has caused enough of a stir already and that's not the only thing that's different. In an interview with Indie Wire, he spoke about how Netflix is changing the industry, making blockbuster films more accessible to people — and quicker. He said, "Netflix has made something that can live on the big screen, even though most people streaming this won’t have a Dolby cinema at home. It seems that Netflix is so forward-thinking. Just even that [Netflix logo] da-da noise, that’s the [MGM] lion’s roar of today.”

Chalamet is joined by Robert Pattison, Ben Mendelsohn, Dean-Charles Chapman, Lily-Rose Depp, and Joel Edgerton in the Shakespearian adaptation. Alongside playing the famous role of Sir John Falstaff, Edgerton also teamed up with David Michôd to write The King.

This isn't the first time the pair have worked together. Edgerton also starred in both Animal Kingdom and The Rover. Speaking about their partnership to The List Michôd said, "with Joel, the thrill for me was getting him to do something totally new. He's really fun, he's really warm but he never gets to be those things on screen. I loved making a character for him that brought out those qualities."

To any superfans belonging to Club Chalamet, it's always a blessing to hear he's fronting another film, even if it is with a questionable haircut. Speaking about the actor, Michôd told Deadline, "I knew that if I was casting a 22-year-old New Yorker to play Henry V, he was going to have to do a lot of work. I had every faith that he would do it. I haven’t had that feeling before. I was just so sure that someone so young would just do it and find it and make it great." I can hardly wait to see him in action.

You can catch The King in select cinemas from Oct. 11 and on Netflix UK from Nov. 1.

More like this
Adam Ali Hopes 'Waterloo Road' Will “Subvert” Queer Misconceptions
By Sam Ramsden
Jemima Khan Used Her Own Life As Inspo For 'What’s Love Got To Do With It?'
By Darshita Goyal
Gerard Butler Insisted On Adding This Pivotal Scene To 'Plane'
By Catharina Cheung
You’ll Definitely Recognise Isadóra Bjarkardóttir Barney’s Mum
By Maxine Harrison
Get The Very Best Of Bustle/UK
Sign up for Bustle UK's twice-weekly newsletter, featuring the latest must-watch TV, moving personal stories, and expert advice on the hottest viral buys.