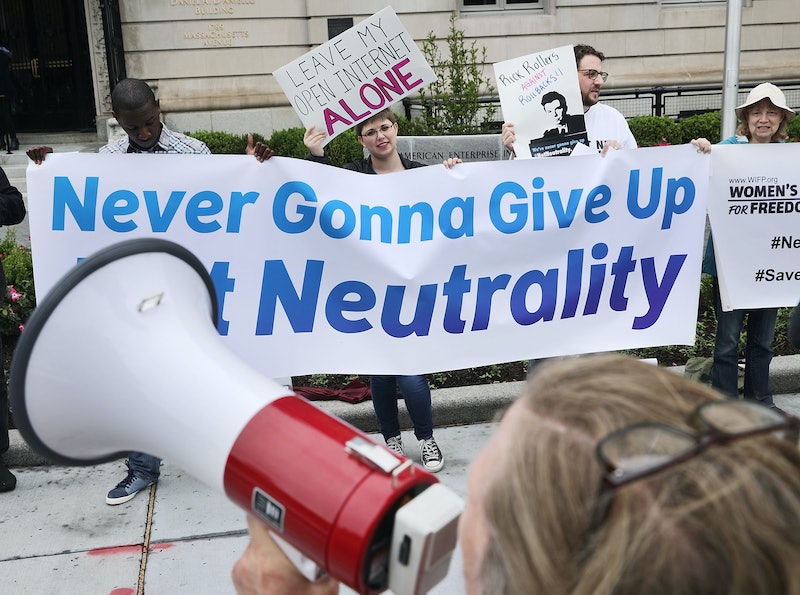 The Federal Communications Commission will vote on whether or not to reverse net-neutrality protections on Thursday, Dec. 14, and it's not a bad idea to mark it in your calendar. That's because the vote could drastically change the way you use the internet each and every day, whether it's to pay your bills, online shop, or check out social media.

The FCC is going ahead with the vote, despite backlash from Democrats who've asked for a delay, saying this decision will limit Americans' ability to equally access all content on the internet. Meanwhile, Republicans claim the move will "restore internet freedom."

In response to the 28 Democratic senators who urged the agency on Monday to postpone the vote, the FCC told Ars Technica in a statement:

This is just evidence that supporters of heavy-handed Internet regulations are becoming more desperate by the day as their effort to defeat Chairman [Ajit] Pai's plan to restore Internet freedom has stalled. The vote will proceed as scheduled on December 14.

But Democrats aren't pushing back against this vote simply because they want to preserve the Obama-era measure. Some politicians are citing supposedly fake comments that were filed during the open comment period on the repeal proposal, The Hill reported. New York Attorney General Eric Schneiderman, the City of New York, and advocacy groups made a similar case. In fact, Schneiderman's suggested launching an investigation into the reportedly fake comments.

"I'm asking Chairman Pai to join us in our effort to investigate millions of fake comments and massive identity theft perpetrated against Americans," he said, according to The Hill.

If the regulations are repealed, authority will be handed over from broadband providers to the Federal Trade Commission. This would allow them to speed up or slow down certain content on the internet at their will. Additionally, internet service providers could also charge users for access to certain content, and charge companies for priority access. They could even go so far as to block certain content, leaving "consumers utterly unprotected," according to a letter to Pai from NYC and advocacy groups. Another consequence of repealing the rules would be that big companies would benefit, while startups trying to gain an audience would suffer.

To fully understand the consequences, you need only look at the situation in other countries that lack net neutrality. In Portugal, for example, citizens are charged varying fees to access different parts of the internet.

Yet Pai remains unconvinced, asserting that repealing these rules will lead to broadband companies investing more in things like upgrading their networks and expanding them to new customers. Only, as Business Insider points out, there hasn't been a marked decrease in broadband investment since these rules were implemented. In addition, another study by the consumer advocacy group Free Press found that broadband investment had actually increased since 2015.

In anticipation of the net neutrality vote, Reddit users took over the site's homepage, displaying information of members of Congress who took money from anti-net neutrality lobbyists, including Wisconsin Sen. Ron Johnson, who sold "fellow Wisconsinites, and this nation, to the telecom lobby for the prices of $123,652," one Reddit user wrote. Florida Sen. Marco Rubio, Arizona Sen. John McCain, and Tennessee Sens. Bob Corker and Lamar Alexander were also called out for accepting money from the anti-net neutrality lobbyists.

Without these rules in place, Congress will have to step in and figure out what agency has regulatory authority over internet providers. Considering Republican and Democratic lawmakers have not been able to reach a legislative compromise concerning these regulations, let alone much of anything, this would be a difficult and potentially lengthy process. In the meantime, if you want to help preserve equal Internet access, there are some steps you can take.

More like this
Which Cast Member of 'Westworld' Season 4 Has the Highest Net Worth?
By Meg Walters
Kim Kardashian Is Releasing A Line Of Earbuds With Beats
By Alexis Morillo
These Cheap Things With Near-Perfect Amazon Reviews Will Make Your Home Look SO Much Better
By Dena Ogden
How To Schedule An Instagram Post
By Emma Carey
Get Even More From Bustle — Sign Up For The Newsletter