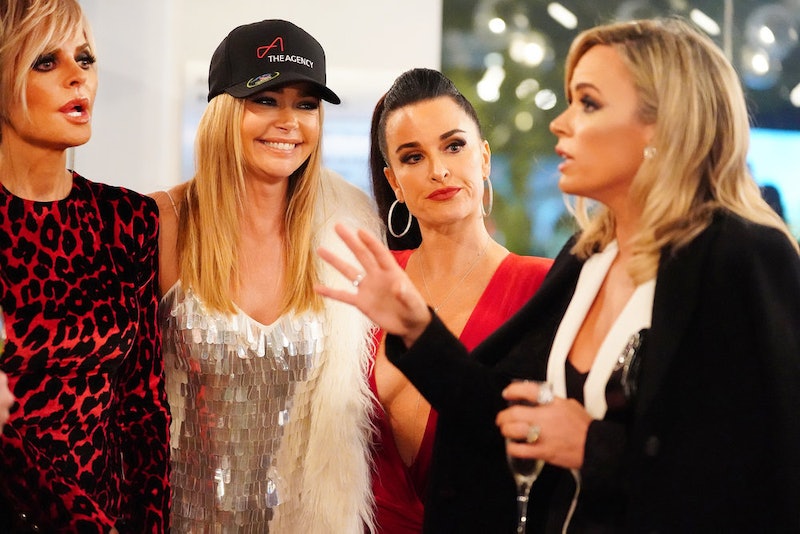 Season 9 of Real Housewives Of Beverly Hills has been a real doozy, hasn't it? We lost Lisa Vanderpump, had to put up Camille, and never really got to the bottom of puppygate. The point is — this season has been coming to a head for a long time, and we're finally almost at the breaking point. Luckily, the women will be able to hash it all out at the Real Housewives Of Beverly Hills Season 9 reunion, which is coming so, so soon.

There's a break in Real Housewives Of Beverly Hills showings because of the July 4th holiday, but the Season 9 finale should air on July 9 and the first batch of reunion shows on July 16. That means only a few weeks to get ready for the drama. And if the drama on the front half of the season had everything to do with Lucy Lucy Apple Juice the dog and Lisa Vanderpump denouncing all of her friendships, the second half has been a mishmash of random flare ups. Think: Teddi and Kyle bullying Erika or Camille spilling the tea about anyone possible to anyone who will listen. It's honestly not as interesting as Lisa Vanderpump going nuclear on all of her friends in the sake of her being right, but it will have to do.

There must have been plenty to talk about, because shortly after filming, Kyle Richards mentioned on her Instagram that it was their longest reunion filming ever.

She looks amazing, but she was probably exhausted by the end of it, no? It had to be hard especially for Kyle because of the nature of her relationship with Lisa Vanderpump. Now, these two are estranged, and it's always hard to see that happen. As Brandi Glanville told the Real Housewives Of Beverly Hills After Show, though, all of this Vanderpump stuff has been a long time coming. "Watching this season and hearing that it's all about a dog is hilarious because it's not about a dog. Let's be clear," Brandi said. "It's about friendships and Lisa manipulating people and finally having to take ownership for that."

Per People, Lisa Vanderpump is not coming back to Real Housewives Of Beverly Hills for Season 10 (or probably any other season), and she did not film for the Season 9 reunion. "I just had a horrible time with the show and the women," Lisa told Extra, per People. "It was a very sad time in my life and it wasn’t made any better. I just decided to walk away.” That's Lisa's prerogative, for sure, and many fans will miss her.

Lisa Rinna pointed out in a tweet that it's literally in the Housewives' contract that they have to show up for the reunion, so producers probably weren't happy with Lisa Vanderpump for bailing.

And as for the Housewives who did show up to film the reunion, Us Weekly reports that it's Camille Grammer who took Lisa Vanderpump's place in the hot seat. We won't know for sure until the Real Housewives Of Beverly Hills Season 9 reunion airs later in July, but one thing is for sure — Independence Day is just a preview for the real fireworks.